On Tuesday, March 30, 2010, a Friendship Exchange Agreement was concluded between APU and Taketa City. The signing ceremony was held at the Oita Prefectural Office. Taketa City has championed the "return to the rural villages" movement and is engaged in the revitalization and preservation of its traditional culture, while APU aims to nurture globally-minded graduates as a centre for education and research. This Agreement serves as the starting point for further exchange programs and the foundation of a solid collaborative and cooperative relationship between the two parties. 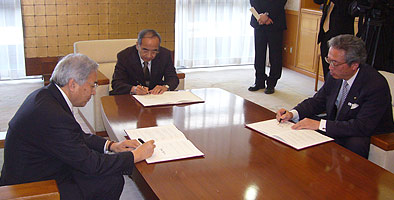 The signing ceremony was attended by the Mayor of Taketa City Mr. SHUTO Katsuji and APU President KORENAGA Shun, and witnessed by the Governor of Oita Prefecture HIROSE Katsusada. President KORENAGA spoke of his aspirations for the future of the relationship, "Taketa has a reputation of producing many historical figures and is blessed with a rich cultural background of art and music. I'm sure that this exchange agreement will prove very meaningful for our students. May this exchange agreement be the start of more collaboration, interaction and exchange". Mayor SHUTO replied, "Global understanding encourages local discoveries. I hope that this agreement with APU leads to the rediscovery of Taketa City's true value and potential."


With a population of approximately 27,000, Taketa City is blessed with beautiful natural surroundings and was created in April 2005 as a result of the municipal merger with Ogi Town, Kuju Town and Naoiri Town. Situated in south-west Oita Prefecture, Taketa City is a well loved and flourishing agricultural area boasting some of Oita Prefecture's most famous tourist attractions, a number of historical heritage sites such as the remains of Oka Castle, nationally renowned carbonated spring sources and the expansive Kuju Plateau. Through its "return to the rural villages" policy, Taketa aims to alleviate the effects of an aging and declining population, and also promote community revitalization, by attracting members of the baby-boom generation to move into the city.


APU was opened through the invitation of Oita Prefecture and Beppu City, and considers the internationalisation and revitalization of the region to be one of its central missions. APU has now concluded agreements with 15 municipalities and organizations both within and outside of Oita Prefecture including this agreement with Oita City. Every year over 1000 students participate in exchange programs both in and outside the Prefecture and are making their contribution to the regional community. 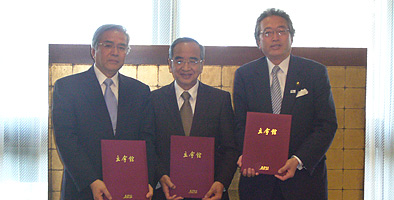