On Friday, March 26, 2010, the Director General of the ASEAN Department at the Ministry of Foreign Affairs of the LAO Peoples Democratic Republic, Dr. Khiane PHANSOURIVONG visited APU and met with APU Vice-President YAMAGAMI Susumu. 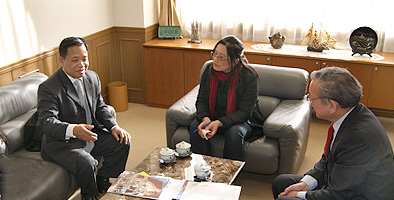 The group discussed a number of issues including the APU international student population, scholarship systems and the removal of Japanese language barriers for new-entrants, and Ms. KHOMTHAVONG spoke about her campus life at APU. Dr. Khiane asked a number of questions about APU students from Southeast Asia and Vice-President YAMAGAMI commented on their achievements, "we have a large number of students from the Mekong Region* and we have found that students from this area traditionally achieve very high grade-point averages".

Under the guidance of APU student KAWAMATA Akane (APS3, Japan), Dr. Khiane also enjoyed a tour of a number of Beppu's tourist spots including the Jigoku Hot Spring "Hells" and its vivid thermal deposits. Student tour guide Ms. KAWAMATA spoke of her impressions, "Because I live in Beppu City I am often approached by foreign tourists and have been able to give them a simple tour, but this was my first experience of guiding a foreign VIP so I was very nervous. But Dr. Khiane listened very intently and seemed to enjoy his time very much. During the tour I was also able to ask a lot of questions about local conditions in Laos and I'm sure that this experience will prove useful in my future seminar research."

Dr. Khiane visited Japan at the official invitation of the Japanese Government and visited Fukuoka, Kitakyushu and Beppu. At the conclusion of his visit Dr. Khiane spoke of Beppu as a synergy of people living in harmony with its beautiful nature, its industry and academia, and described it as the most impressive place he visited during his tour.

APU currently has 562 students from the Mekong Region (as of November 1, 2009) and continues to develop strong ties with region. In December 2008, two local-body officials and two staff members of the Laos Ministry of Commerce and Industry took part in the JICA sponsored "One Village One Product Project in Savannakhet Province and Saravanne Province Seminar"held at APU. Please look forward to even more developments.

Please click here for the JICA One Village, One Product training seminar: 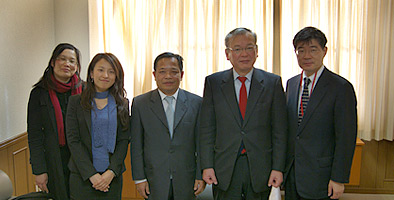