From July 31 till 2 August, to coincide with the 60th anniversary of World War II, APU student circle IROHA, visited Nagasaki to contemplate war and peace. The circle aims to instil knowledge of Japan, to not only international students but domestic students alike, through participation in the Bean-Throwing Festival and the Star Festival and other such cultural festivals which take place in line with Japan’s four seasons. Five domestic students represented by YANO Keiko (APM 3rd year), and international students HOANG Thao (APM 2nd year, Vietnam) and LENG Lei Sing (APM 2nd year, Malaysia) made up the tour group.
The circle members attended numerous study meetings concerning war, and folded paper cranes as a symbol of their desire for peace. APU students and staff were joined by students from Ritsumeikan Biwako-Kusatsu Campus and high school students who had come to APU Open Campus events to fold paper cranes with a multitude of other people who offered the paper cranes to the Nagasaki Atomic Bomb Museum. 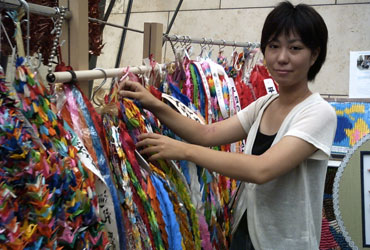 The circle member visited Suwa Shinto Shrine where people had prayed for victory during the war; Nagasaki Atomic Bomb Museum; Yamazato Primary School (where a great number of children lost their lives); the hypocentre of the atomic bomb; the remains of the prison bureau and the commemorative statue to peace in Peace Park; Urakami Cathedral where the Belfry Dome was blown away by the atomic bomb); the remaining pillars of the Nagasaki Medical University (which were dislocated by the force of the atomic blast); and the Oka Masaharu Memorial which has an exhibition that places responsibility on Japan for the War. The students were taken on a tour by the Peace Guides who showed them around these remains and more of the atomic blast.

IROHA representative YANO Keiko commented that: "A picture is worth a thousand words. I thought I was well aware of the horrors of the atomic bomb and the tragedy of war because of the images I had seen on T.V and photographs. However, when I saw the area that was the hypocentre of the atomic bomb and thought about the cars passing by, the rows of houses in this area, and the amount of people who perished 60 years here, I was overcome with an ineffable feeling". HOANG Thao Ly had the following impressions: "I had visited Hiroshima to undertake peace studies in the past, but this was my first visit to Nagasaki. To be able to see Nagasaki – a city that has achieved such dramatic improvements from the suffering of war to its present day beauty – was quite an experience".

The circle was also able to meet with Mr. WADA Koichi from the Nagasaki Promotion of Peace Association. Mr. WADA took the time to deliver this special message to the Malaysian and Vietnamese APU students: "As a Japanese person, I offer my apologies for what Japan did to your countries in the past". A victim of the Nagasaki Atomic bombing, Mr. WADA suffers to this day from his experience. These parting words of contrite moved the students. 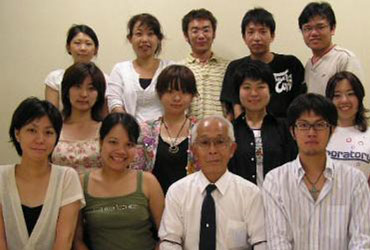 In closing Ms. YANO expressed her resolve with the following message: "With this visit to Nagasaki, we did not focus our attention only on the victims of the atomic bomb, but also Japan's role as the victimiser. We realised that it was necessary to look at what happened in WWII factually. What is important now is how to apply this experience with future undertakings. First of all I would like to expression my gratitude to everyone who folded the paper cranes and to inform them that we plan to hold a photo exhibition. In addition we are going to report on what we have learnt and out thoughts from this trip to the students of APU".