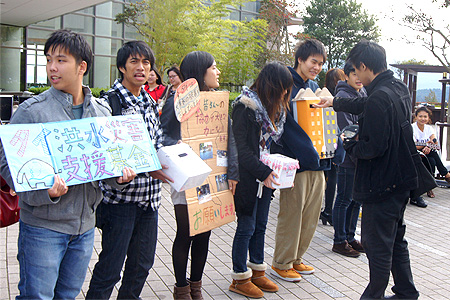 The on-campus appeal featured traditional stage performances and dances by student volunteers who also performed during the Multicultural Weeks. A charity performance, costume parade and donation appeal was also held at JR Beppu station by e-KAMISHIBAI-tai, a volunteer group made up of past and present APU students.

The six-day appeal managed to collect a total of 763,365yen in donations from students and local community members. All proceeds will be donated to the disaster areas via the Royal Thai Embassy in Japan and will go towards helping to save lives and rebuild the disaster-affected areas.

Group representative, PIANGJUN Patipon (APS3, Thailand) commented on the event, “Please let me express my gratitude on behalf of all the APU Thai students to everyone who offered their support and cooperation with our Thai flood relief appeal. This couldn’t have succeeded without you. Not only has your support contributed to the rebuilding process, but it has also given hope and courage to many people in Thailand.

In the wake of record rainfall since July, massive floods have gripped parts of Thailand, claimed over 350 lives and continue to affect over 2.8 million people. Massive damage continues to affect Japanese businesses in the area and many factories have had to halt operations. The floods are also affecting neighboring countries including Cambodia, Laos and Vietnam.
We hope for a speedy recovery and that the many people affected by these massive floods are able to return to their normal lives as soon as possible. 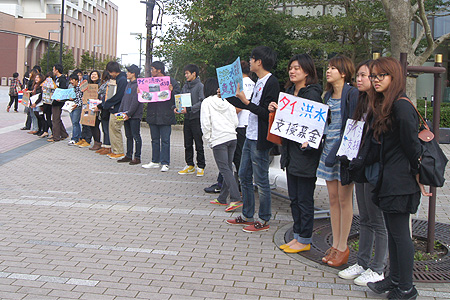