On Wednesday, May 2, 2012, the Minister of Education, Culture, Sports, Science and Technology (MEXT), Mr. HIRANO Hirofumi, visited APU as an example of a highly internationalized university. During his visit, Minister HIRANO met with APU President KORENAGA Shun, members of the University executive, and a group of APU students.

During the discussion, President KORENAGA described some of APU’s unique features including the Japanese-English dual language education system, the University’s track record of recruiting international students, and the high regard afforded by the business community to APU’s human resource development and employment achievements. These results were also praised by Minister HIRANO who spoke of how the future of Japan rests on the nation’s internationalisation and the development of globally-minded graduates.

Minister HIRANO then met with seven APU students of four different nationalities including the Philippines, Indonesia and Japan, and enjoyed a lively discussion about the kind of society and education that is needed for the redevelopment of Japan. Minister HIRANO also appeared to be impressed by the students’ positive attitude and their high level of communication skills. 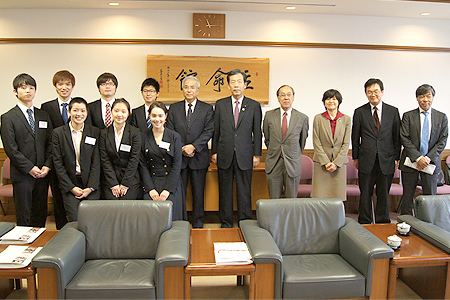