The Ecuador Ambassador to Japan, Mr. Adolfo Alvarez Villagomez visited APU on March 3 2006. The Ambassador was welcomed by Vice President, HAYASHI Kentaro as well as students from Ecuador pursuing their studies at APU.
Among topics of conversation, APU's New Challenge Plan was raised as well as the APU Advisory Committee. The Ambassador appeared to enjoy conversing with the students and spoke candidly with them. 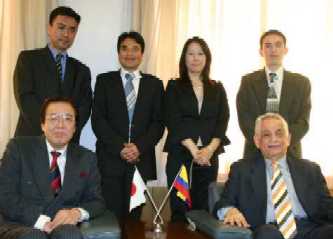