The Beppu Documentary Film Festival Executive Committee (BDFEC) held The Documentary Film Festival, "Beppu de Docu'n!" on Saturday, January 20th and Sunday, January 1st at the Bluebird Theatre in Beppu City.
The theme of this year's film festival is "place". The committee hopes that people who come to see the films will contemplate "Where their place is?" The question may seem a random one, but "Where do you feel the most at home?" Is it at school, home, with your friends, in your home country or maybe when you're alone? The answers are bound to differ from person to person. Some people may not be sure where their "place" is yet.

This festival showed nine films documenting different people's meaning of "place" referring to the sub-themes of nation, school, friends, family, war zone and more. Hopefully, many people were able to reflect on their lives in regards to the concept of "place" throughout the festival.

For more details please click on the below link for the Beppu Documentary Film Festival Executive Committee's homepage.
http://beppudocu06.web.fc2.com/index2.html 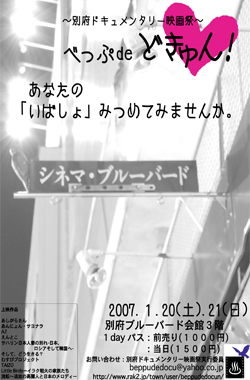