In recognition of the Middle East as an important region for international study development and cooperation, APU has been cooperating with the Japan Cooperation Center for the Middle East on its "Japan Program." In March this year APU and the Japan Cooperation Center for the Middle East co-hosted, with the support of the Nihon Keizai Shimbun, the "Middle East – Japan Forum" at both the APU Campus and in Tokyo. For more information on this Forum, click here.
Seen as an important step in the promotion of future academic development in the Middle East region, APU has recently welcomed 20 students to begin their studies under the Saudi Arabia government-funded 'King Abdullah Scholarship Program'.

The King Abdullah Scholarship Program, a program funded by the Saudi Arabia government, is a project that helps send students to study at universities around the globe. The program aims at fostering and educating the next generation of human resources in Saudi Arabia.

While Japan began to accept students on this program in April this year, APU is the first university to directly accept students without preliminary education at Japanese language schools. 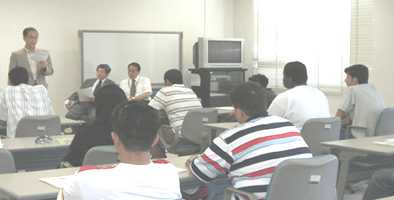