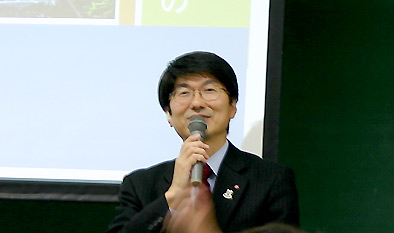 This special lecture, on community development in Beppu and Oita (field study), was the final lecture in a series of relay lectures coordinated by Professor MAKITA Masahiro of the College of Asia Pacific Management. The lecture was open to all students and also members of the public.

During his time as a city employee, Mayor Taue initiated the "Nagasaki Saruku", a city walking tour modeled on Beppu's "Hatto Onpaku" Urban Walking Tour. During the lecture, the mayor talked about the role of local government in relation to city development, his perspective on town planning, and his thoughts about Nagasaki.

The students in the audience scribbled notes as they listened to the mayor speak of real experiences, such as the incredibly short time of 2 hours and 2 days for his mayoral election battle. He also talked about his student days, the challenges of launching an event, and gave advice on getting the most out of a town and its people.

At the end of the lecture, the mayor answered questions from the students and other members of the audience about competition and collaboration in tourism, and how public administration should play an active role in Beppu's various city walking tours. 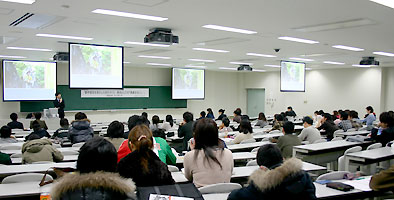