On June 16th 2008, an interactive workshop entitled "Transitional Justice at Crossroad" was held at APU by the Honorable guest Professor Albin Eser, a former judge of International Criminal Tribunal for Yugoslavia (ICTY), and visiting professor at Ritsumeikan University, in the joint class of APS/ISS Major Seminar of Yukiko Takashiba, Director of the ISS. 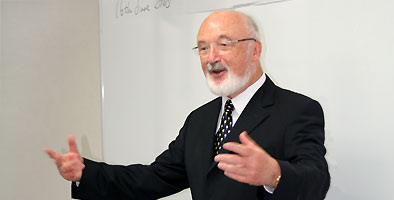 During the workshop, which was also attended by non-seminar class students, a lot of time was given for students to express opinions and to ask Prof. Eser questions.

Transitional Justice refers to an area of research that explores the role of Justice in the rebuilding of societies after periods of conflict and unrest. This field has attracted considerable attention since the 1990's, as a way of responding to the massive human rights abuses resulting from ethnic conflicts in the aftermath of the Cold War. Prior to the workshop, Professor Eser, who has been involved in the cutting-edge development of this field, kindly accommodated to address the seminar students' questions. "The workshop thus broadly covered three topics: 1) Development of International Criminal Law, 2) Relations of international criminal institutions with national tribunals as well as with the Security Council, and 3) Case study from the ICTY jurisprudence concerning "superior responsibility". With regard to number 2), Professor Eser also shared his personal experience regarding his involvement as a member of the German delegation in negotiations that led to the adoption of the Rome Statute of the International Criminal Court (ICC). 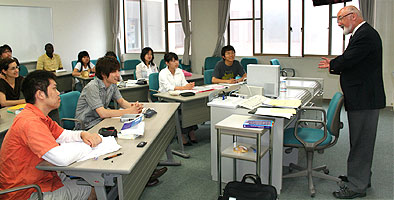 Dai YOSHINARI (APS3, Japan) said "Prof. Eser spoke of the importance of the Nuremburg and Tokyo tribunals in regards to the development of trying individuals under international law, which from the perspective of establishing internationally authorized criminal courts at first glance looks like a recent thing. His passion when he spoke about this made it a very memorable part of the workshop for me. Mr. Eser, who has continued to stand at the forefront of international criminal law development, experienced the Second World War, witnessed the reality of the International Military Tribunal, and lived through the aftermath in post-war Germany. With this history, Prof. Eser has continued to work towards the cause, becoming deeply involved with the development of international criminal law. I was moved and impressed by Prof. Eser's words, as he went about passing on this history to us, the next generation."

Manami OYAMA (APS4, Japan) said "I have been reminded of the important role that Transitional Justice plays in today's world, a world where human rights are violated every day."Albert Shrestha (APS3, Nepal) said " in addition to learning about the legal concepts and procedures, I have recognized the various kinds of efforts that humankind must make to move towards a better world than the one we live in today."

Students heard personal accounts of how the efforts of Prof. Eser and other experts contributed to the drafting of the the Rome Statute for the International Criminal Court. Ekaterina PORRAS (APS3, Mexico) and Kazunori SHIBATA (APS3, Japan) made the comment that "we were impressed to hear about how individual efforts can have such an impact in the international community. Prof. Eser's talk has rejuvenated our motivation to become individuals capable of making contributions on the international stage."

The invitation of Prof. Eser to the APU was made possible with the assistance of Prof, DEGUCHI Masahisa from the Faculty of Law at Ritsumeikan University. Since April this year, the TAKASHIBA seminar has, in close collaboration with Prof. Eser, worked towards "an interactive workshop as opposed to a one-way lecture with a view to providing students with the opportunity to meet with a world-class expert directly, so that they could gain hints and suggestions related to the problems they were facing in their own individual research and to learn from his wealth of experiences in the field of international criminal law. As he spoke about the international criminal tribunals, Prof. Eser appealed to students to work towards the goals of freedom, justice and peace." 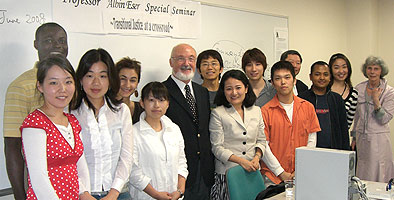