17 students, mainly from the United States of America, have been attending a 2 month Short-term Program "Summer APU Gateway Program" at APU from June 4th to August 1st. 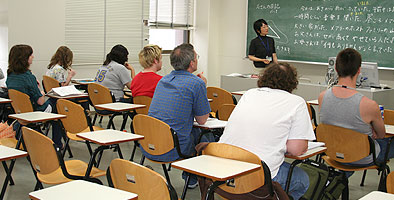 After the 17 participants attended an orientation and a welcome party on Friday, June 6th, Japanese Language classes began on Monday the 9th and the class was divided into 3 levels. In addition, the students deepened their understanding of Japanese culture and history by taking a tea ceremony class, making ceramics and participating in a farm stay program in Ajimu and a field trip to Nagasaki city. The participants have enjoyed APU campus life during the program by staying at AP House and through exchange with APU students.

At SHIN Kimie's Japanese Class B (Intermediate) on Wednesday, July 2nd, the participants used a diary-style text to practice oral reading and to learn about the change of verbal ending. They also learned about the difference between casual and formal Japanese and how Japanese customs are integrated into words. For example, when Japanese people give a present to others, they say, "TSUMARANAI MONO DESU GA (This is not so wonderful)" in order to express modesty. Some participants were surprised and noticed a variety of Japanese expressions.

TORITANI Pongpan, an APU instructor, offered a Tea Ceremony class at the APU tea house "Washinan." The participants learned about manner of the tea ceremony. Although they found it difficult to sit formally, they practiced actively and provided Matcha one another. 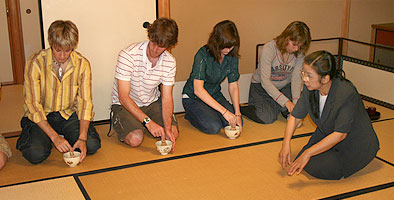