A famous modern Japanese style house, the ChoChoKaku in Beppu City, provided the venue for the second Citizens' College lecture of 2008, held on Saturday July 12th on the topic of the Renaissance of Hot Spring Tourism. 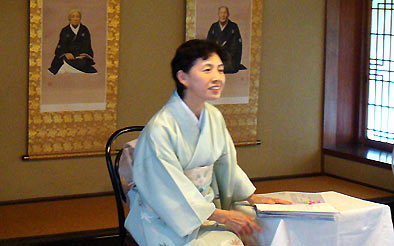 The lecture was divided into two sessions. During the first session, President of WAK JAPAN, OGAWA Michi gave a lecture entitled "Using our everyday lifestyle and culture to promote tourism - an all-women's tourism venture business - ." During the second session ChoChoKaku Director TAKAHASHI Hatoko and WAK President OGAWA Michi held a discussion with lecture participants on the topic of "Japanese Culture in Beppu." Participants were then given a guided tour of the ChoChoKaku premises by Ms. TAKAHASHI.

Ms. OGAWA's business, which is run predominantly in the Kyoto region, involves finding house wives skilled in different areas of Japanese culture and offering cultural experience packages to foreign tourists. During her lecture Ms. OGAWA spoke about what led her to start her business and how she finds and organizes local human resources.

The ChoChoKaku, one of best examples of modern-era Japanese style housing in Beppu, was built in 1929 by TAKAHASHI Kinya as his personal residence and guest house. Mr. TAKAHASHI was a key person in government and financial circles in Oita at that time. The house became certified as a registered tangible cultural property in 2001. It is open to public.

APU became a recipient of funding under the Ministry of Education's "Contemporary Education Needs Initiative Support Program (Contemporary GP)" in the field of "Contributing to Regional Revitalization (Local Areas)" in July 2007. The lecture for local residents detailed here was held as part of this project. 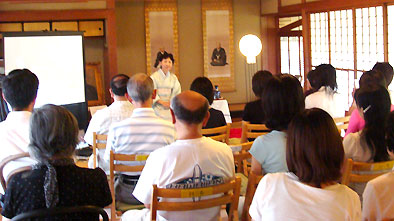