The APU volunteer circle Habitat APU's 15 members have traveled through three North Kyushu Prefectures (Kumamoto, Fukuoka and Oita Prefecture) by bicycle for the 11 days from the 19th till the 28th of September. While traveling around, they have been putting into effect their "Charinko Purezen" (Bicycle charity event), collecting street donations and giving presentations at high schools. 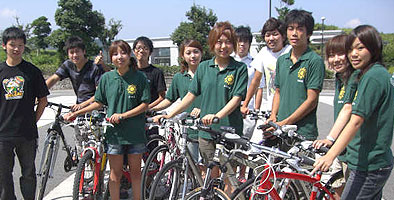 "Charinko Purezen" is the first attempt for Habitat APU to inform many people about the poverty problems around the world, which is their aim and is what "Charinko Purezen" was planned for.
The group held a street appeal for donations in Kumamoto City and gave a presentation at a local high school. Then on the next day, they headed for the first destination – Dazaifu City.
On their travels from Dazaifu City to Fukuoka City and Kitakyushu City they held street appeals and gave presentations at high schools. The money raised will be donated to their mother organization – Habitat For Humanity International and will be used to fund housing projects.

Before he departed, TSURU Yusuke (APS2 Japan), who represents the "Charinko Purezen" plan spoke of his aspirations for the plan "There are people in the world who have no where to call home. We are endeavoring to let even just one more person know about this situation and about the activities of Habitat by making every encounter with people count".

Habitat APU was set up in 2006 as a student branch of Habitat For Humanity International and currently has 40 members. To date, they have participated in construction projects in the Philippines and Thailand and have held public sessions and photo exhibitions on campus.
Link to the Habitat APU web-site: http://habitatapu.web.fc2.com/

Link to the Habitat for Humanity Japan
http://www.habitatjp.org/index.php 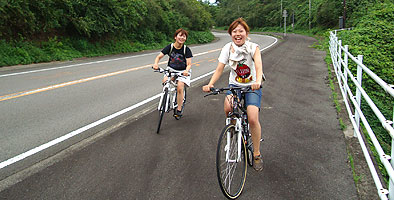