On Tuesday September 2, 2008, the debriefing session for MORI Atsushi (APS3 Japan) who completed his internship at NPO "Hatto Onpaku" was held at the Beppu Hotel New Tsuruta.Through activities such as the supporting the Ekimae Koto Hot Springs through the Gemuse Café initiative, Mr. MORI increased his interest in town development and since Autumn last year has taken a year off school for an on the job experience (internship) at NPO "Hatto Onpaku" with a view to learn about ways of regional activation based on the methods that they use.

During his time there, Mr. MORI actively participated in the national training workshops and had many chances to meet with experts in regional development outside of the prefecture. At the training workshops, where people from all over the country meet, he worked hard as a director of operations and, also at the Onpaku activities of Miyakonojo City, Miyazaki Prefecture and Soja City, Okayama Prefecture, he worked hard with adaptable fighting potential carried by the support for the project over the last 6 months as an operations director for Oita Prefecture. Looking back on his year, he said "I have been able to broaden my horizons and my way of thinking has become more flexible through experiencing things and meeting many people which I couldn't do if I was just at University".

NPO "Hatto Onpaku" is a non-profit organization which was established with the aim of revitalizing Beppu and Onsen areas, and based on regional activation activities wherein the citizens take the main role, aims to hold multiple events utilizing the regions resources. To date, the "Hot Spring Exposition(Onpaku)" has been planning and putting into place community based events. In 2004, The Ministry of Economy, Trade and Industry's "Health Service Industry Creation Support Program" was adopted into the Oita Prefecture's "Base Tourist Area Maintenance Program". 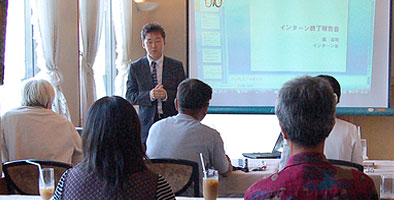