On Monday October 13, 2008, Philippine local body officials such as local village, town and city mayors came to APU for the JICA sponsored Autonomous Region Cluster Activation Seminar and began their study which will take place over approximately 2 weeks. 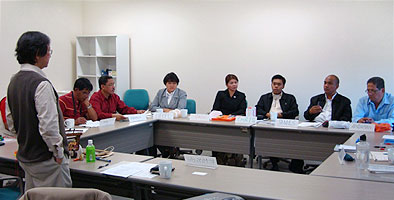 APU has been accepting trainees from countries around the world as part of the Japan International Cooperation Agency (JICA) sponsored ODA Technical Cooperation Project.

This time a group of 8 village, town and city mayors from the Philippines came to APU. On the first day of training, APS Professor MIYOSHI Koichi gave a lecture and the trainees listened intently to what the Professor had to say. The group is here until Saturday October 25 and as well as attending lectures at APU, will visit places inside and outside the prefecture such as Taketa City, Kokonoe town and Kurokawa Onsen in Aso, Kumamoto Prefecture, where they will listen to lectures by local group leaders actually involved in regional promotion who will talk about their experiences. They will also attend lectures at the Oita One Village One Product (OVOP) International Exchange Promotion Committee to deepen their understanding of the One Village One Product Movement.

Oita has received great interest internationally as the birthplace of the One Village One Product Movement and has in 2008 already received trainees from the Africa region, ASEAN region, Chile and East Timor. This is the 3rd time to receive trainees from the Philippines. 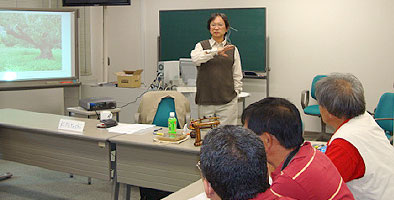