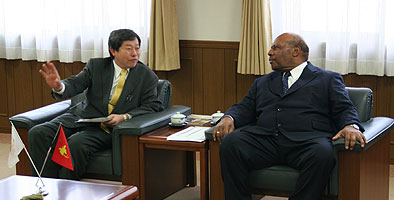 During the chat Mr. MAUE said "There is a lot of interest in Papua New Ginuea to study in Japan. Students who study in Japan bring back to Papua New Ginuea different ideas, culture and also language and new ideas which have proven usefull in policy development. We are very anxious to continue sending students to APU which is a very international university – a claim that not many universities in Japan can make".

To which Mr. YAKUSHIJI said "As an international university, we feel that it is very important to have a wide range of countries represented at APU. Therefore we also hope to continue to have students from Papua New Guinea here at APU".

The Independent State of Papua New Guinea, as a major power in the in Oceania, and has great influence in the Pacific Islands Forum (PIF) as a regional leader. Mr. MAUE attended the "CHINA IN OCEANIA:TOWARDS A NEW REGIONAL ORDER?" conference which covered such topics as "the needs of the Pacific Island nations which constitute Oceania", "the rise of China and Taiwan in Oceania", and "the role of Japan towards these issues" and gave a keynote address.
Furthermore, there is currently a Papua New Guniean student studying at the APU Graduate School and it is hoped that the friendly cooperative relationship between APU and the Independent State of Papua New Guniea will continue.

Please click this link for more details about the conference https://www.apu.ac.jp/home/news/article/?storyid=485 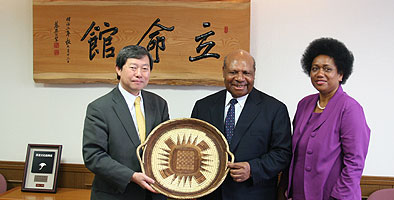