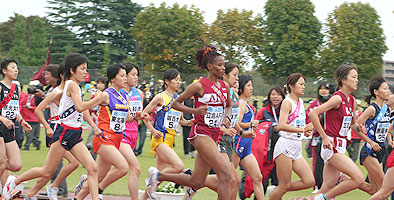 The APU runners held places in the middle of the pack from start to finish in a race which proved to be a tough event. They all ran well and were able to better their pervious year's time by approximately 3 minutes. The current record holder of the Japan Student 5000m record, Ms. WANJOHIT, who made her last appearance at the event, ran the longest stage at 9.1kms as the 3rd runner, delivered a good performance to overtake 5 runners and placed 3rd in her stage. 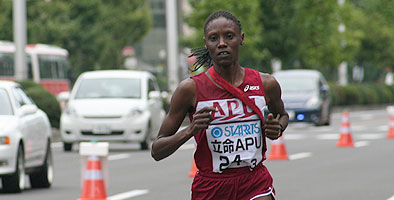 On the day the campus festival 'Tenkusai' was held people watched the race on a screen set up in the cafeteria. At the race track, many students and members of the public came along and cheered.
Ritsumeikan University continued their winning streak to record their 3 straight win and their 5th in total with a time of 2:06:53.

Thank you all for your support. We ask for your continued support.

Please click here for more details on the results (Japanese only)