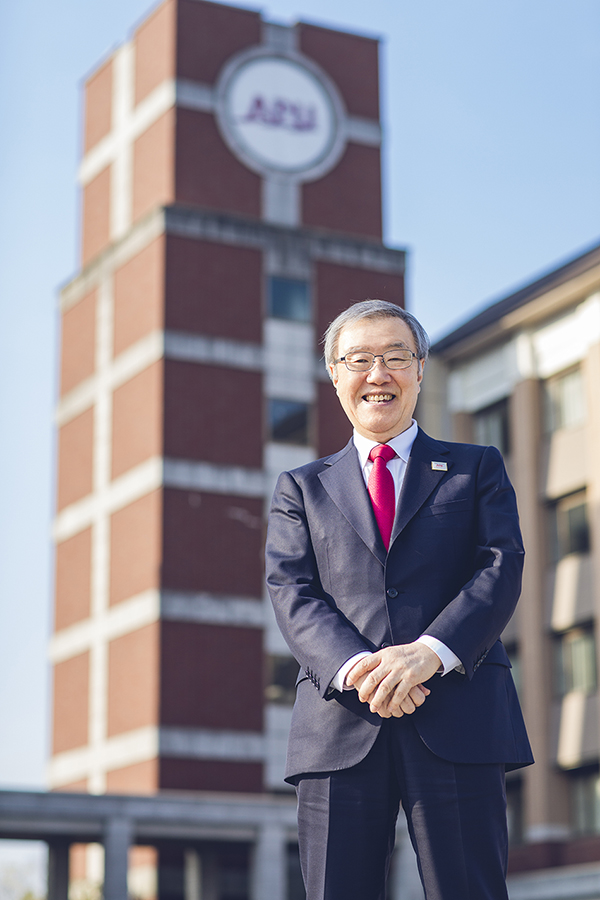 Next year Ritsumeikan Asia Pacific University (APU) will celebrate its 20th anniversary. Since APU opened its doors in 2000, it has produced more than 18,000 alumni who are active the world over, and the Alumni Association now has 26 overseas chapters. In that same time frame, APU has welcomed students from 152 countries and regions, and roughly half of the students currently studying here are international students from 92 countries and regions. In this way, APU can be considered a microcosm of the world and a “United Nations of the Young.”
In accordance with the APU2030 Vision, APU is pursuing a range of initiatives to produce talent who can be active in the global arena. It is a bold plan that aims to send APU graduates all over the globe where they can use what they have learned at APU to take action in their respective fields and change the world. In short, we are producing change-makers.
Since becoming president last year, I have spoken with many students and found that many of them want to start their own businesses. This is why we established the APU Startup Program (also known as Deguchi School) and used a crowdfunding campaign to solicit support from a large number of people.
Based on the slogan of “shaping our world, inspiring new stories,” we aim to boost the competitiveness of our education and research and will continue pursuing initiatives suited to a “second inception” of APU. As part of this, we have even launched a project under which we aim to establish a new tourism college in 2022. No matter what kind of new challenges we aim to tackle, it is essential that we pursue a vision of “One APU” where the faculty and staff work together with all of the students, alumni, guardians, and local residents as well as the “APU fans” from around the globe who have made donations. Once again, on the occasion of APU’s 20th anniversary, I sincerely request your continued support for APU, which is both a microcosm of the world and a “United Nations of the Young.”


As a means of giving thanks and sharing our progress, we are releasing the “For One APU” donation report.
The latest report can be downloaded below.
Please be sure to look at it. 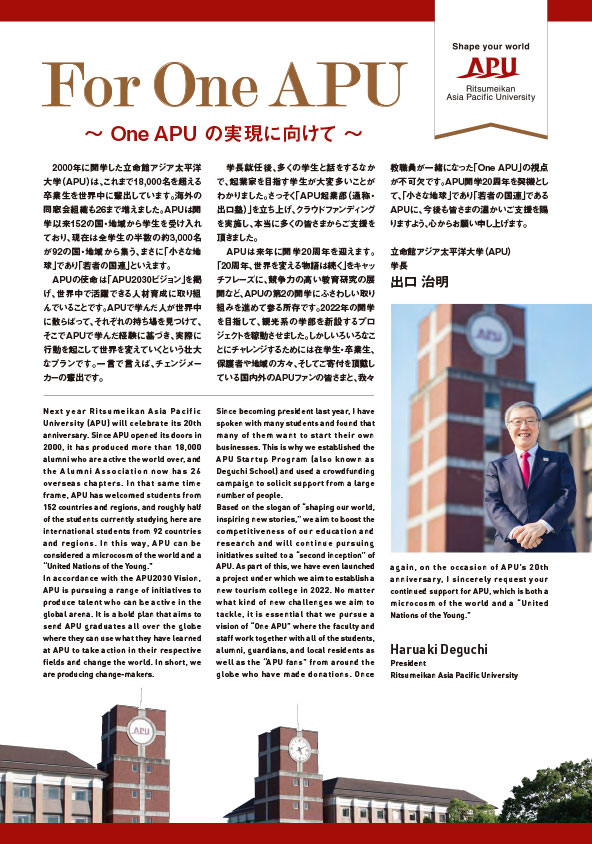 Donation Report for the 2018 Fiscal Year