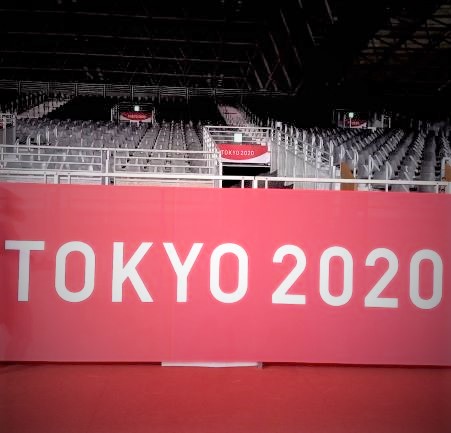 In March 2021, APU received a request from the Tokyo Organizing Committee of the Olympic and Paralympic Games to send our students to the 2020 Tokyo Olympics and Paralympics as language volunteers. After coordinating with the Organizing Committee on infection prevention measures, we decided to send a total of 47 students who were selected from among those who applied. We are extremely grateful for the generous financial support for these students which went to help cover their accommodation and other costs and enabled them to be able to complete their activities without incurring a great deal of personal expense. Thank you again for your donation.
The students who were placed in the Language Volunteer Service Division of the International Bureau worked as language volunteers at each of the competition venues where they interpreted for the Olympians and Paralympians during media interviews and at doping test sites. The International Bureau of the Organizing Committee contacted us to thank us for sending our students as volunteers. It is no small feat that they were able to use their native language, in addition to English and Japanese, to ensure smooth communication with the athletes. The following are reports from students who participated in the volunteer activities.

●Please read the Olympic Charter and report on what you learned through this activity and what you can make use of your future.
The Olympic Charter states that the official languages of the IOC are French and English. With this in mind, simultaneous interpretations must be done in French, English, German, Spanish, Russian and Arabic. While carrying out my language service duties at Olympic Stadium, I noticed that volunteers for all these languages were present. Not only that but other languages not included in the list above were still treated with respect and importance. I was translating for Swahili and English. I was received with a warm welcome and did not feel like my language was left out at all. The Olympics is truly a celebration of diversity and forming new bonds through a mix of culture through language.
Olympism is described as seeking to create educational value of good examples through social responsibility and respect for universal fundamental ethical principles. As volunteers there was a mutual understanding that our role was important to the success of the games. We worked in harmony with each other, helping where we could but ultimately every single person performed their role with little to no direction. My group’s supervisor remarked every single day how she had nothing much to do since we were all so proactive. I asked questions when I needed clarification and was very comfortable with the group of volunteers I was with even if we had known each other for only a couple of days. I was the youngest there, most of the other volunteers were pursuing the PhDs and some were years into their working careers. I admired the way they carried themselves, willing to learn regardless of their stature in life. We embodied the spirit of Olympism.
Modern Olympism was conceived in 1894. The principles have remained the same with very few changes added to them. This is a testament to the well-organized management and structure of the IOC. From the manner in which I saw all the different volunteering groups were run, the IOC ensures everything is run like a well oil machine. I saw close to 10 different volunteering groups made up of 10 people or more. They had roles different from mine, but I could tell we were working together. If my group did its job well, they had an easier time and vice versa.
The five interlaced rings represent the union of the five continents and the meeting of athletes from throughout the world at the Olympic Games. I would say not only athletes, but everyone involved including the volunteers. I met people from countries I had never met anyone from including Poland, Italy and Columbia. I had such a fulfilling time listening to their stories and hearing about so many different cultures and languages. It was such an eclectic group of people from so many different places, and we all happened to meet at the Olympics. My biggest, pleasant surprise were Japanese who knew some Swahili. It was such a shock to hear them speak my language while I’m still learning theirs. It gave me motivation to keep at learning and bettering my Japanese.
In conclusion, Olympism is a philosophy of life, exalting and combining in a balanced whole the qualities of body, will and mind. Seeing the athletes in real life was such a surreal experience. The years of hard work they put into getting to where they are is evident in the way they look and conduct themselves. This not only comes from intense training of the body but also of the mind. Whether win or lose, they carried themselves with grace and held their heads high. They knew they had done all that they could to be there, and they did their best.
These are some lessons I will take forward with me in my studies and life in general. To take care of my mind and body to the best of ability while pushing forward and not giving up in my endeavors.