Use of Audiovisual material 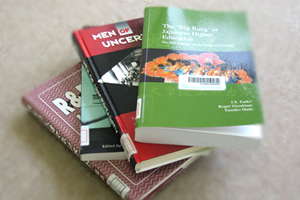 (1) Overview
The APU Collection to the right of the library entrance, showcases works by APU faculty. This collection cannot be borrowed or removed, but copies for use are available in the general reading rooms.

(2) Inquries
Please inquire at the Reference Counter if you cannot find a book you are looking for.