Kyushu is at the top nationwide in the penetration rate of home solar systems, and with that the thin-film solar cell plants of four companies have become operational, and the "Solar Island Kyushu" industrial cluster has been formed. In light of these developments, an organization called “SOlar NEtwork in Q-shu (SONEQ)” has been formed in order to promote the solar cell industry in Kyushu and the widespread use of solar cells, with the support of the Bureau of Economy, Trade and Industry.
SONEQ has four research groups. Director Nakata was invited to the 3rd meeting of the “Study group for development of solar cell diagnostic systems and business models” (held on March 26, 2012, at the Fukuoka Institute of System LSI Design Industry).
Mr. Hiroshi Date, President of System JD, who presided over the study group, spoke about the sale of "SOKODES", a solar cell inspection system.
Following that, Director Nakata gave a lecture entitled "Solar Cell Business Model and Service Integration - A Comparison with the Semiconductor and LCD Businesses."
Based on the lecture, participants discussed a business model that utilizes "SOKODES", and talked about the possible direction of things to come. 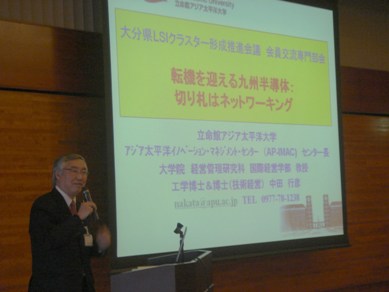 In addition, in order to promote and integrate the semiconductor industry in Oita, with the support of Oita Prefecture, Promotion Conference of OITA LSI Cluster has been established. Director Nakata is serving as a committee member of the professional exchange division of this Promotion Conference.
The FY2011 Research and Development working group results reporting session & technician exchange meeting were held on March 28, 2012 in Oita City.
At this event, Director Nakata gave a lecture entitled "Kyushu Semiconductors Facing a Turning Point: The Trump Card is Networking" with the goal of facilitating the exchange of semiconductor technologists in Oita Prefecture. Since last year’s lecture on networking was popular, this year he gave a talk about networking but changed the focus to Kyushu Semiconductor, which is facing a turning point. To reduce the risks at the turning point, he explained, in entering new business areas or expanding business into Asia, there is a need for networking capabilities.
In addition, he spoke about an effective training program at APU, where eight workers from Toho Titanium Co., Ltd. and three workers from Sony Corporation were accepted as specially registered students in a program which helps them gain global communication skills and to gain benefits from a global network.
He explained that APU is the gateway to the network of Asia, and recommended participation in the specially registered student program for companies in Oita. And by the actual exchanging of business cards at the meeting, he promoted networking. 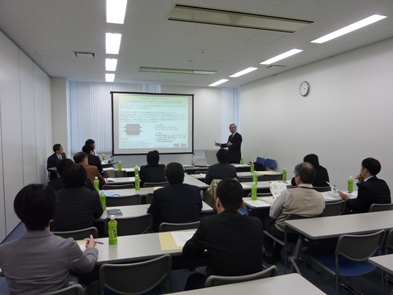