Latin American Week gives a lecture at a RCAPS Seminar:

On Monday Decembr 4, a RCAPS sponsored seminar was held at APU. 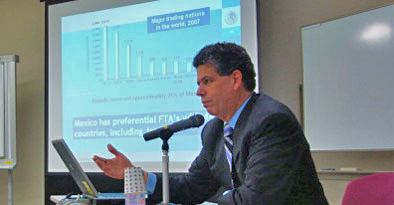 The Latin America-Asia society along with the Research office at Ritsumeikan Asia Pacific University proudly presented the first edition of the Mexico-Japan Business Symposium. Taking advantage of the fact that 2008 was the 120th year anniversary between Japan and Mexico the Latin American-Asia society decided to hold an event worthy of this celebration.

The Symposium took the shape of a business conference in which three main speakers gave the audience specific scenarios and facts surrounding Mexico and Japan in three different sectors.

120 Years of History between Mexico and Japan
Dr. Kishiro Ohgaki

Dr. Ohgaki holds two PHD degrees, one from Navarra University in Spain and another one from the National University of Mexico. Dr. Ohgaki is the honorary Consul of Mexico in Japan and is also the head of the Institute for Latin American studies at Kyoto University of Foreign Studies. Dr. Ohgaki gave a presentation dealing with the historical bilateral relations between Japan and Mexico for the past 120 years. He focused on the similarities between these two great nations such as the fact that both Japan and Mexico were at some point in history victims to a war with the U.S. Dr. Ohgaki stressed the importance of the bilateral relations and in his perspective this unique bond shared by Mexico in Japan relies on the principle of equality. According to Dr. Ohgaki Japan and Mexico are very different but similar at the same time.

Minister Raul was the head of the Mexican negotiation team during the NAFTA negotiations. Minister Raul's presentation was mainly about the economic implications and the future of Japan and Mexico under the EPA. According to Minister Raul the world is going to experience a growth of trade inflows coming from the Pacific making Mexico a very attractive market to introduce products.
Japan only holds this sort of agreements with two countries, Singapore and Mexico. According to Minister Raul the EPA will open many doors to Japanese companies that aspire to conquer the lucrative Mexican market. One of Japan's largest electronics companies ranks Mexico as its 3rd largest market. Minister Raul argues that Mexico has grown dramatically both in infrastructure and government policies. With a 300 billion national infrastructure plan into action and the EPA taking full flight we are sure to expect many important things out of the Japan-Mexico equation.

SuKarne is the largest beef producer in Mexico and the 5th largest beef producer in North America. SuKarne has developed and evolved since it was established 15 years ago. SuKarne was the first company that introduced tracking devices to its cattle and it was recognized by the Japanese government as a low risk beef producer. This helped the company to become a very attractive company to import from for companies such as Hoka-Hoka Tei and Bulls Eye restaurants among others. 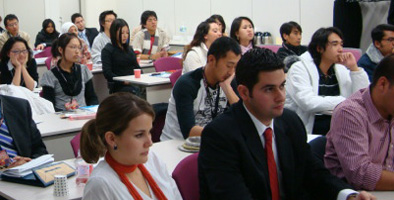