On Wednesday, December 21st, an RCAPS sponsored seminar was held at APU. 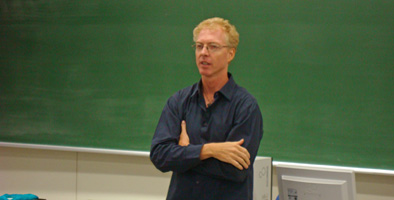 For the December 2011 RCAPS Seminar, filmmaker Stephen Earnhart was invited to APU to present and discuss his documentary film, "Source of Pride: The Making of 'Pride and Glory'". This documentary film came about when Earnhart was invited to join the sibling filmmakers Gavin and Gary O'Connor as they prepared for and shot the New Line Cinema film "Pride and Glory", about corruption among police officers in New York City. Earnhart's film reveals many behind-the-scenes goings on during the making of the studio film, including conflicts between actors and filmmakers, the need to replace actors after filming had already started, and the struggle to finish filming according to schedule.

After the film screening, Earnhart talked about the process of shooting and editing his film, and took questions from the students in attendance. Earnhart also talked about his time at Miramax Pictures, where he worked as a liaison between filmmakers and the studio, working to control the budgets and schedules of the films being made.

Earnhart's documentary is a fascinating look at the process of making a big-budget studio film, and the seminar students were clearly very interested in the topic, many staying around after the event concluded to continue to ask questions of Earnhart, who was kind enough to stay and indulge them. 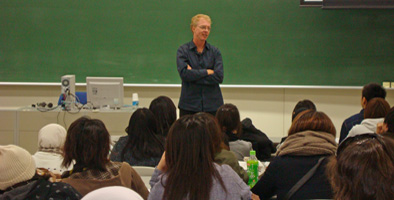