Professor Dick Werbner gives a lecture at a RCAPS Seminar:

On Friday June 19th, RCAPS sponsored a film showing, as part of the RCAPS Seminar Series, as at APU. 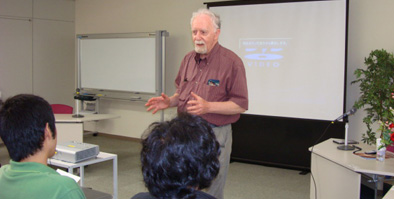 On June 19 RCAPS welcomed Professor Dick Werbner (Professor Emeritus of Anthropology, University of Manchester) to give a seminar titled, "Holy Hustlers: A film about young, unemployed men and charismatic religion in Botswana". The seminar showed the film, "Holy Hustlers", the fourth film in the series "The Quest for Well-Being in Botswana", directed by Professor Werbner and was followed by discussion between Professor Werbner and the students and faculty members who attended.
The film depicts, "Charismatic, street-wise young men, living in Botswana's capital, command the prophetic domain in Eloyi, their Apostolic faith-healing church. A crisis is escalating. Bitter, sinful accusations divide Eloyi's village-based archbishop and his son, the city-based bishop. The church itself, seen "under destruction', splits."
It shows the division of one of the most controversial churches in Botswana, as a result of quarrel between a bishop and his son, and a spiritual war the prohets fight between good and evil.
In the seminar, Professor Werbner discussed the tensions between holiness and hustling and the crisis of the church. The film shows how Christianity works and changes, making new forms and is redesigned. Professor Werbner discussed how the prophets, unemployed young men, assert power as they are holy and at the same time hustlers. He also talked of the radical difference and synergy of how the prophet, is a "dividual" in that he is a figure of suffering that takes the pain of the other, and is permeated by the other, but at the same time is a powerful individual, thus creating a tension between modern subjectivity.
Professor Werbner shows his films to different groups in Botswana to, as he said, "thicken the sense of consciousness", as well as in universities in Botswana and in other countries. 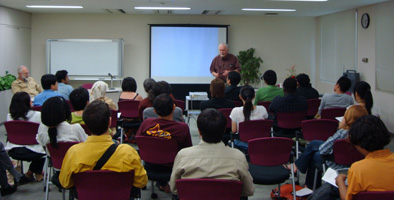