On Tuesday June 23, a RCAPS sponsored seminar was held at APU. 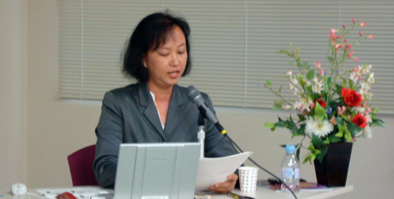 On June 23, RCAPS welcomed Professor THANG Leng Leng from the National University of Singapore to give a seminar titled "'It's and Asian Thing': Cosplay and cultural identity in Singapore".
The main objectives of Professor Thang's study of cosplay were to "contribute to the discourse on globalization, culture and identity by focusing on trans-Asian cultural connections (Iwabuchi 2001; Chua 2002)" and see in what ways, as she stated, "does the introduction of new modes of consumption related to Japanese popular culture goods bring with it changes in the way consumers construct images of themselves, Japan and the world? What are they? How is it consumed and with what effect?"
Professor Thang discussed the growing phenomena of cosplay in Singaporean youth pop culture, relating it to fandom studies, fan culture, in which fans that might otherwise be marginalized in mainstream society have no limits, are able to transcend physical, social, and cultural boundaries.
She said that today "costume play" is one of the fastest growing trends in Singapore. The origin of cosplay dates to 1976 when fans arrived dressed in their favorite manga characters at a comic market in Tokyo. In Singapore, the first public convention was held in 1999 and has been growing ever since. In 2002 the Singapore Cosplay Club was established.
Professor Thang showed a short film, "Fans in New Places: Cosplay in Singapore" created by Elizabeth Maclachlan and herself. The film display a convention held in Singapore of cosplayers, the audience, and the people involved (ie. Photographers, family members/friends involved with costume making, etc.)
Professor Thang went on to discuss how in the hierarchy of cosplayers around the world Singaporeans had ranked Japan as number 1, followed by East Asia, then by Southeast Asia, and then lastly by the West. Singaporeans describe themselves as 'mediocre' she said, and listed reasons such as "poor weather, can't wear makeup, manga/anime perceived as 'kid's culture', and that the fans are 'too cheap'". The other difference Professor Thang pointed out was that the Singaporean cosplayers saw themselves as more 'conservative' compared to Japanese cosplayers. For example, regulations at the conventions exist, one stating "Please refrain from any public display of undesirable behaviors, such as vulgarities or homosexuality", implying "no revealing clothing", "no cross-dressing", "no hentai (erotic spin on cosplay)".
A discussion was held afterwards with many students asking questions and taking advantage of the opportunity to talk with Professor Thang and exchange ideas and their opinions. 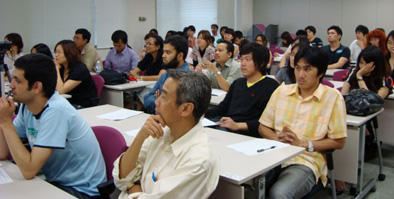