RCAPS Report “Positing the new Japanese security policies in the Middle East and North Africa: The case of the second Abe administration (2012 2020)” 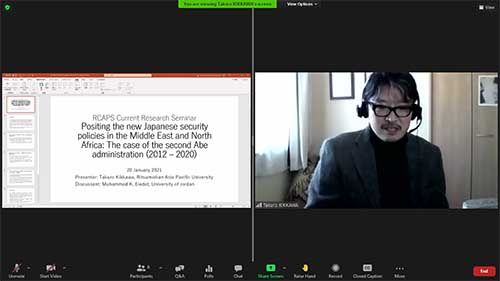 [Report by Professor KIKKAWA Takuro as the seminar organizer]

The presenter discussed Japan’s proactive peace diplomacy led by Prime Minister Shinzo Abe in 2012-2020, focusing on its implementation in the Middle East and North Africa (MENA). The presentation analyzed the consequences of Abe administration’s diplomatic-security legacy in MENA, mainly in the significant progress in deepening bilateral ties with the MENA states and the more active role of the Japanese Self Defense Forces (JSDF) in the region. In contrast, the domestic controversy over JSDF’s international role still casts a shadow on its operability in MENA, and the problems regarding JSDF mission in South Sudan became a critical case to reveal its legal vulnerability. The study concluded that the post-cold war international system and relatively the more favourable public opinion on Japan’s new role in international cooperation such as UNPKOs and anti-terrorism positively worked to justify the national leaders’ push for a more substantial commitment to the conflict resolution in MENA. By contrast, the discussant suggested a need for a more flexible approach to rediscover and reinterpret Japan’s conventional value-based diplomacy in MENA, rather than the presenter’s two-level analysis based on the post-1990s new international system and the following political trends in Japan that enabled Abe administration to promote the new diplomacy. He also proposed supplying other approaches, for example, reanalyzing Japan’s diplomatic legacy in its leadership in MENA’s nuclear disarmament would verify this study’s academic outcome. One of the audiences suggested examining the presented arguments in the context of structural transformation in MENA, such as the history of the Arab-Israeli conflicts would demonstrate the presenter’s views more comprehensively.