Dr. Hallett Brien gives a lecture at a RCAPS Seminar:

On Wednesday July 22, a RCAPS sponsored seminar was held at APU.

The seminar welcomed Dr. Hallett Brien (Associate Professor, Matsunaga Institute for Peace University of Hawai'i at Manoa). His lecture was titled, "Atomic Timeline to Abolition, with Focus on Obama's Initiative". 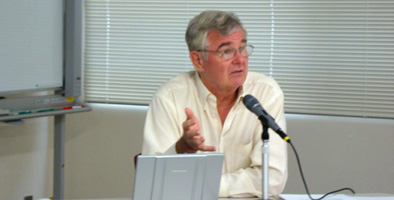 On July 22, RCAPS welcomed Professor Brien Hallet from the University of Hawai'i for the seminar "Atomic Timeline to Abolition, with Focus on Obama's Initiative". About 20 students and APU professors attended.
The seminar began with Professor Hallet's "Atomic Timeline to Abolition 1914-2009" in which he traced the history of the atomic bomb and its three stories. The stories were "1. The Japanese Story", "2. The American Story", and "3. The Untold Story". In the "Untold Story" Professor Hallet discussed the three weapons of mass destruction that new science created: Nuclear, Biological, and Chemical. Of the three, he said that only nuclear has not been outlawed because the other two have been outlawed by all countries because they cannot be controlled and they do not have any military value.
Professor Hallet's main argument in the seminar was the contradiction of the nuclear weapon policy. "Atomic bombs have not been used since 1945. Therefore, since 1945, the policy has been: Use by Non-Use", he said. He showed how United States presidents since Harry S. Truman have followed this policy all agreeing that nuclear weapons should never be used, but that the United States should have them. Professor Hallet argued that the "real weapons of mass destruction since 1945 have been small arms" and said, "they [nuclear weapons] are not actually used, but are used to psychologically instill fear" this he called "The Nuclear Equivocation".
Professor Hallett's conclusion was the "absolute abolition" of nuclear weapons. His reasons were,
"There are no targets, Precision munitions are more accurate and effective, U.S. already has preponderance of useable military power", he said. In the presentation, Professor Hallett showed how the timeline, these three reasons plus the Use by Non-use policy has lead him to the conclusion of absolute abolition.
There was ample time after the seminar for discussion and questions during which Professor Hallett answered APU students' and professors' questions. 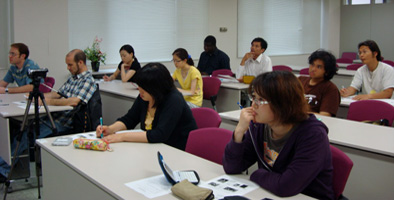