Professor, MANTELLO, Peter A. gives a lecture at a RCAPS Seminar :

On Friday July 24, a RCAPS sponsored seminar was held at APU. 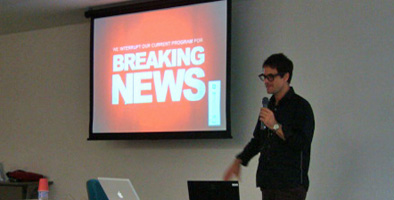 On July 24, RCAPS welcomed Professor Peter Mantello, Media Studies professor at APU to give his seminar titled, "Pixel Counts vs. Death Counts: Videogames, Wargames and Simulation". Around 40 APU students and faculty members attended the seminar.
Professor Mantello's seminar engaged the audience with many video clips and images and looked into the trajectory of war video games. He began the seminar discussing his childhood and growing up in the 60's when, he said, the horrors of nuclear war were vivid and a nuclear bomb was a constant threat at the back of his mind.
Professor Mantello discussed the importance of the concepts "Play" and "Games" in society and how games reflect real life. He also discussed how games and military have been linked for more than two thousand years, with examples such as Go, Chess and the Olympics.
As with other games, video games, he said, are also modeled after real life, such as the first war video game, "Space Wars", created after the Soviet Union launched Sputnik 1, which depicted the technological, cultural, and ideological rivalry during the Cold War. Since then, war video games have further developed and today have even come to be used by the American army to recruit young people. Professor Mantello discussed the creation of 3D video games and the aesthetics of the 1st person shooter games in which one holds a gun and shoots at characters inside a game.
"The celebrated feature of the gun", he said, "is its effectiveness, accuracy and ability to make death more life like". Professor Mantello also showed the U.S. army's official video game, "America's Army", which was created in 2000 when the US army hit its lowest recruitment numbers in history. He talked of how the video game is very realistic and that in fact, the website blurs the real U.S. army and the video game, making it confusing as to whether one is signing up for the game or for the video game. The U.S. army military also uses video games for training their soldiers, he said. The seminar was followed by a discussion session, in which APU students and faculty members addressed Professor Mantello with their questions and comments.