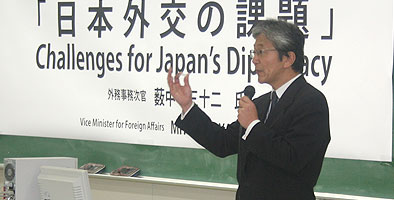 During his special lecture, the Vice-Minister for Foreign Affairs, Mr. YABUNAKA spoke about a range of issues including current and future Japanese diplomacy and the influence on diplomacy by the new OBAMA administration, "we have seen complete and drastic changes in international diplomacy from the 'you are either with us, or against us' style of the BUSH administration, towards the 'let's work together' approach of the OBAMA administration."

He spoke of the future prospects for Japanese diplomacy, "Japan has to speak up and make people more aware of its achievements especially its civil assistance such as road, rail and educational achievements in Afghanistan. We are seeing remarkable developments in recent diplomacy. For example, last year the leaders of China, Korea and Japan engaged in dialogue in Kyushu where everyone at the table was talking about our future together, not our past. This is truly remarkable."

Members of the audience raised questions regarding a more active role for Japan in international diplomacy and Japan's ODA to which the Mr. YABUNAKA gave detailed responses. The lecture proved to be a wonderful opportunity for students to learn about real-life international relations theory from a current member of the Ministry of Foreign Affairs top echelon.

In December 2002, Vice-Minister for Foreign Affairs, Mr. YABUNAKA, after a career including postings as the Japanese Ambassador to the Republic of Korea and the United States of America, took up the position of Director of the Asian and Oceanian Affairs Bureau where he was in charge of negotiations with North Korea regarding nuclear issues and the return of abductees. Then, in January 2008 he took up the top MOF position as Vice Minister for Foreign Affairs. Furthermore, in December 2008, he took up a position as a member of the APU 'Advisory Committee' support organisation. 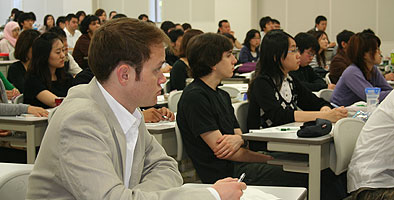