On Friday, July 5, 2009, APU graduate currently working as the Kunisaki Office Chief of the Oita Godo Press, Mr. Yoshihisa ETO (APS grad'06) visited APU and reflected on his time as a student. 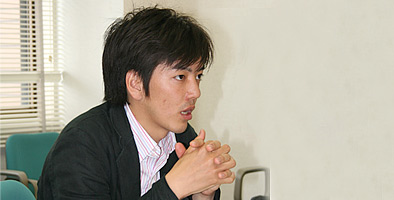 Mr. ETO, student during APU's 3rd year, is one of the founding APU students. He was involved in a range of extracurricular activities such as the setting up the movie-making circle "Producers", and meeting with Korean film director Kwak Kyung-Taek. Academically speaking, he had a great interest in social phenomenon and environmental issues such as regional activation and the rubbish separation initiatives at Minamata City, and through lectures and seminars, was able to deepen his understanding of them. He thought it necessary to share regional issues with the wider society and began to have an interest in mass media after taking the "Yomiuri Shimbun Special Lecture" which aims to deepen investigations into the current state of the world through newspaper media.

As a reporter, Mr. ETO reports on a wide range of news items from regional events through to incidents and accidents. Looking back on his time as a student at APU he said, "I have become able to understand different people's viewpoints and I owe this to my exchanges with people of different nationality, culture and religion at the multicultural international campus of APU. I am putting to use these experiences when I cover an incident or event news item. Also, as I have many opportunities to meet with local people, I am also putting to good use my experience of communicating with different people at APU."

He also said to the students, "I want you to make use of the international and multicultural environment of APU and aim to make a contribution to the international world, not only to the Beppu region. I also hope you will not hesitate to communicate with a range of students, not be afraid of failure and take on a range of challenges."

On the day, Mr. ETO spoke with NIRAULA Baburam (APS3, Nepal) a member of a student media circle. The results of this discussion are to be published on the career page of the upcoming APU Information Vol.20 (to be published in July 2009)
Be sure to check it out.
The APU Information online version website:
http://www.apu.ac.jp/apuinformation/index.htm 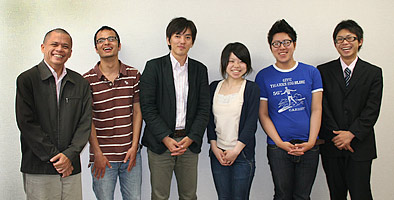