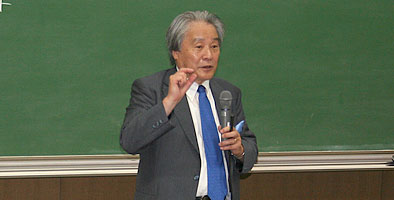 During his lecture, Professor Tsurumi Yoshihiro described the differences between the Bush administration and the current Obama administration such as their differing standpoint towards the regulation of financial markets and the acceptance of global warming as "harming mankind and not science fiction".

He advised that anyone aiming to work in international circles such as global organizations, multinational business or journalism need to have a "Sense of History, a Sense of Global Relations and a Sense of Social Justice and Ethics". Regarding the "Sense of History", the Professor discussed and illustrated with slides and political cartoons caricature to describe the factors and reasons behind the current state of the world including war, oil prices and the collapse of Wall Street.

The lecture covered a wide range of topics including globalization, the flow of technology, information and capital, and his experience of teaching the former US President George W. Bush when he was his student at Harvard Business School.

Following the lecture a lively Q&A session unfolded during which many students took the opportunity to voice their interpretation of current affairs. Looking back on the lecture, one of the participants said, "It was a very interesting lecture from a Japanese lecture with a very impressive background. It proved to be a great opportunity to gain an insight into the workings of America, one of the most powerful nations in the world."

In 1968 Professor Tsurumi Yoshihiro became the first Japanese to gain a doctorate in business administration and has taught at Harvard University, Colombia University and the University of California. 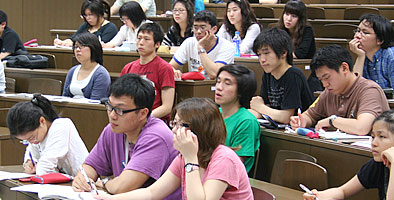