This, the 15th East Asia Peace and Human Rights Camp was held under the theme of first-hand learning about peace and human rights and aims to promote mutual understanding. In this camp, students of different nationalities visit numerous Japan-Korean sites and experience history through the lectures and fieldwork, and exchange opinions with the people who work on-site. It is hoped that this will provide an opportunity for the students to learn together about peace and human rights. This event was planned and run by university students from Japan and Korea such as Ritsumeikan University, APU, Seoul National University, Chonnam University and Cheju National University. To date there have also been visits to Japanese-Korean historical sites such as in Seoul, Okinawa and on Cheju Island.

Approximately 90 people participated in this camp held under the theme of "The Korean Political System" and took part in lectures, field word and debates. The participants learnt about and exchanged opinions on the Korean War, democracy movements and government control of the population throughout the different periods.

One of the camp participants, OTA Nobuko (APS2, Japan) gave her impressions and spoke of her ambitions for the future, "The camp proved to be a great opportunity to visit Korea, learn about the democratization of Korea and also about the citizen's behavior and awareness towards it. Looking forward, I hope to work together with the other circle members to make a success of the next camp which is to be held in Kyushu".

This camp began its activities in 2002 after a trip to Korea in 2000. In February 2008, APU students planned and managed a camped based in the Kyushu area under the theme of forced movement and labor. This camp visited sites such as the Chikuhou Coalfield and history museum, the Muenbochi cemetery and the only other city besides Hiroshima to have experienced an atomic bomb, Nagasaki. Furthermore, it has been decided that the next Camp is to be held in Kyushu and centering on the APU Student Club, preparations for the next meeting are proceeding. 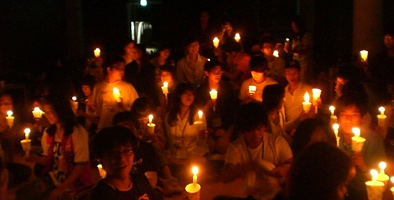