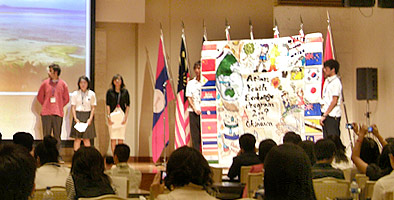 Running from Wednesday, August 5 until Monday 24, the three week program invited young people from Asia and Japanese high school students to experience a range of learning activities under the theme of the environment. The program, now in its second year, aims to nurture in the participants a spirit of someday making a contribution to society.

During his keynote speech at the opening ceremony, President CASSIM spoke of the current issues concerning the environment and water, gave practical examples of water usage in Sri Lanka, issues relating to biodiversity conservation, and about his research on the effects climate change has on the taste of grapes.

Over the three weeks, the participants learnt about the environmental issues from a range of viewpoints, and in particular, issues surrounding access to fresh water. They also looked at current countermeasure policies and learnt about how science can be effectively applied to solve environmental problems on a global scale. They also heard from top-class domestic and international scientists, experienced Okinawa's wealth of nature and culture, lived together with students from a range of different countries and regions, and built up friendships crossing culture and borders through a range of debates and discussions.

During their time on the program, the 9 APU student tutors from 7 Asian nationalities moved together with their group of students and provided a range of support such as study help and interpersonal communication. The APU tutors were held in high regard by the representatives of the Cabinet Office.

APU currently has students enrolled from 87 different countries and regions and continues to accept outstanding students from the Asian area. APU has raised “the creation of the future of the Asia Pacific region” as one of its fundamental principles and will continue to both provide high quality education and nurture graduates with the skills needed to make a contribution to the creation of the future Asia Pacific region.

Some of the student tutors gave their comments on the program:
Ananda Setiyo Ivannanto (GSAPS, Indonesia)
"Being able to participate in this program has been a great opportunity for me to further explore my great interests in young people and world issues. I was able to build friendships with high school students from 16 different countries and regions, participate in activities such as snorkeling and mangrove swamp trekking, and talk about the global issue of securing safe water."

Felicia Yan (APM4, Indonesia)
"The three weeks I spent in Okinawa as a tutor was an unforgettable experience. We worked and studied with very intelligent and creative students, attended very informative lectures and workshops on water and environmental issues and visited such places as the Okinawa Churaumi Aquarium. Not only this, but we also made a lot of lasting friendships."

Adnan Murshed Chowdhury (APM4, Bangladesh)
"Being a tutor in this program has been one of the most memorable experiences of my life. I learnt an enormous amount about water and environmental issues through experiencing the beautiful Okinawa environment. I am sure that in the future the students who took part in this program from Japan and around Asia will work to build a clean, pollution-free world." 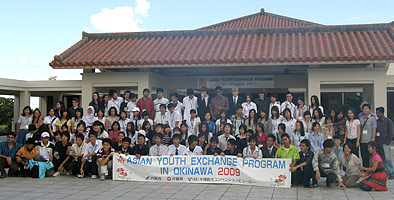