On Saturday, September 26, 2009, The Kyoto International Cultural Association (KICA) hosted "32nd KICA Essay Contest" Speech Presentation Day was held in Kyoto City at which APU student LEE Hee-Woon (APS3, Korea) delivered a speech under the theme of "Japanese Culture, My View" as one of the six contest winners.

Held for foreign nationals living, studying or working in Japan, the KICA Essay Contest invites essays on the Japanese culture, economy, culture and daily life as seen from the point of view of a foreign national and, in addition to a certificate and prize money, the winners are given the opportunity to deliver their essay at the Speech Presentation and Forum day. This year 69 entries were received in across the Japanese and English sections.

After entering APU two years ago, Mr. LEE began learning Japanese starting with the Japanese "Hiragana" alphabet and is currently studying business Japanese as a GBLP* student. Mr. LEE worked on his contest essay under the guidance of Japanese language teacher and Junior Lecturer, WATANABE Wakana and was the only undergraduate prizewinner in the contest.

Under the theme of "The Stately Glitter of the `Golden Isles'", Mr. LEE spoke of studying at APU, what he had felt through his activities with the student NGO PRENGO, Japan and his home country Korea, support activities, the Thai national character and cultural differences.

Looking back on the Essay Presentation Day, Mr. LEE spoke of his joy at being awarded a prize, "I didn't know a word of Japanese before I came to APU and I am very surprised to have been able to submit an essay in Japanese. I am very thankful to the teachers who have supported me. Being able to participate in this presentation day has reaffirmed by belief that there are just so many outstanding students studying at APU."

The Global Business Leader Program (GBLP) was operated as part of an APU program which was successfully awarded funding from the MEXT "Career Development Fund for foreign Students from Asia", an exchange student support program. For this program, APU recruits outstanding students from Asia who express a desire to work in Japanese companies. The program aims to foster global human resources and liaisons that can succeed in business in an effort to boost Japanese companies' international competitive edge. 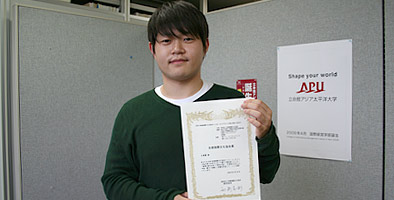