APU will mark its 10th Anniversary in April 2010 and over the next 12 months will be holding a range of commemorative events under the concept of "The Bonds of Friendship 10 years on –and now towards a new stage". These events will both express our thanks for the last 10 years and also our aspirations for the next decade.

On Thursday, October 1, 2009, the Opening Event was held to commemorate the start of the APU 10th Anniversary Event Period. Around 800 students and faculty members came along to the Cafeteria, the event venue, to celebrate together the 10th Anniversary. Eleven international and ten domestic APU Anniversary Event Planning Student Staff provided their assistance with the planning and running of the event, publicity activities and also emceed the event.

After declaring the 10th Anniversary event period officially open, President CASSIM led the students and faculty staff in attendance in a silent prayer for the casualties of the recent typhoon, earthquake and tsunami which have struck The Philippines, Vietnam, Samoa and Indonesia, "It was the Great Sumatra Earthquake of 5 years ago when, feeling the pain of the affected people as their own, a great number of students realized their volunteer spirit and pledged their help to the disaster relief efforts. It is now time to take the next step forward in our development with confidence in our efforts to date and the progress we have made over the last 10 years." The President than gave a few words of thanks, "APU is here today thanks to the support we have received from so many people. As we face our 10th Anniversary, now is the time to make ourselves aware of this support and show our thanks for it. It is also the time to build the new bonds for the future. Let's have confidence that these new bonds and friendships will lead us to further development and give thanks as we look forward to the next ten years."

Following the President's address, information on up-coming commemorative events was announced and the crowd took part in the Anniversary Raffle. The crowd broke into cheers every time a winning number was called out and President CASSIM handed the three remaining special prizes to the winners. The prizes for this raffle were kindly donated by faculty members and staff.

We aim to express our thanks for the last 10 years to the wider community and with the cooperation of the Oita Kotsu and Kamenoi bus companies, wrapped busses featuring APU images, logo and our words of thanks will be running for the next 12 months. We will also be distributing illustrations designed by one of our international students, BUI Xuan Dung (APM3, Vietnam) of the symbolic APU twin towers.

In the coming months APU will be developing a range of events to express our thanks for the last ten years and to share our knowledge with the community such as academic symposiums, public lectures and events that make use of our multicultural surroundings.
Please look forward to upcoming 10th Anniversary Events. 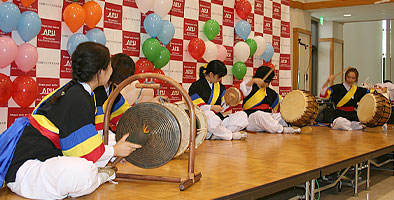 *Only finalized events have been listed. We are currently considering further events to meet the needs of the wider general public.
*There may be slight changes to event dates etc of the events listed.
*Information on upcoming events will be made available on the soon to be opened "10th Anniversary Commemorative Homepage". 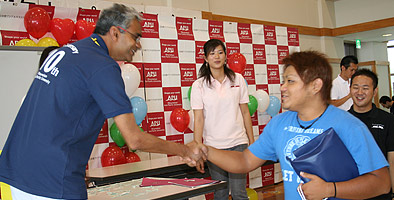