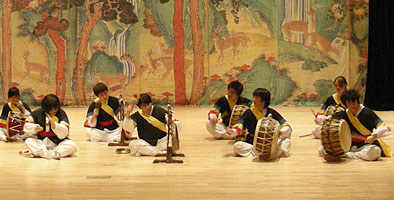 Hosted by the city of Yeosu-si and the Native Folk Culture Preservation Society, the "Yeosu-si All Korea Jin Nam Music Contest" is renowned throughout Korea and aims to uncover excellent up-and-coming traditional Korean performing artists, musicians and performers*. For amateurs, this contest can lead them to a professional musical career. Shinmyoung had registered to play in the university student division that was cancelled due to the current influenza outbreak, but thanks to the kind will of the organizers, they received a special invitation to participate and give their Shinmyoung performance.

Spectators packed the Yeosu-si Town Hall, which hosted the event, and Shinmyoung was able to show the result of their daily practice to a full house. The group initially gained attention as a troupe visiting from Japan, but soon had the crowd on their feet in applause for their fantastic performance. The group not only gained the attention of the local media, but also received a Special Prize.

Shinmyoung representative, KOO Kyo Yeon (APS2, Korea) spoke of her aspirations for the future, "I never had much interest in Shinmyoung when I was in Korea, but after seeing the Shinmyoung performance at the APU Entrance Ceremony and the reaction from the domestic and international students, I decided to join Shinmyoung and further impress the people of the world with Korean traditional music. I am very happy to have had our performances recognized in our home country. I hope to continue to convey the beauty of Shinmyoung to the people of the world."

Established in 2002, Shinmyoung currently has 20 members actively participating in performances both on and off campus. They also plan to perform at the "9th Kusu Town End of Year Charity Show" to be held on Monday, November 23. Please come along to see the Shinmyoung performance, now also renowned in Korea.

* Includes: Pansori (songs and ballads), instruments, dance, Samulunori * and Gosu (ensemble of five Korean instruments)
* Samulunori: "Samul" meaning "four of" and "nori" meaning "play", Samulunori "the playing of four" is a term used to describe the ensemble performances which use four of Korea's traditional musical instruments. 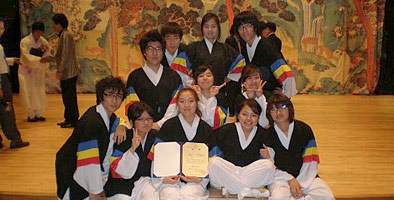