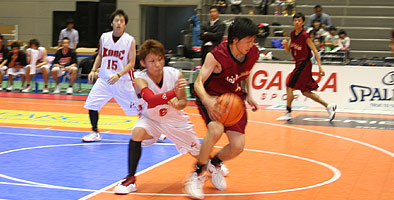 The APU Dolphins (men's) faced off against the Kyushu Sogo Sports College Basketball team as a curtain raiser for Oita Prefecture's only pro-basketball team, the Oita Heat Devils second home game of the season against "RIZING Fukuoka". Although the final score of 71-41 saw the Dolphins incur a painful defeat, the game proved to be a hotly fought contest. Following the exhibition match, team members were able to assist the referees as table officials* for the Heat Devils match through the cooperation of the venue officials.

APU Dolphins representative MATSUOKA Ryota (APM2, Japan) commented, "The result could have been a lot better, but we will work hard to compete in the two tournaments scheduled for this year and try to post some good results". The APU Dolphins currently have 18 members including 7 international students working hard in their daily training. Later this month they plan to compete in the Oita league and next month in the university tournament for the Kyushu, Chugoku and Shikoku block.

Furthermore, the Oita Heat Devils and APU Dolphins plan to further strengthen their cooperative relationship and work together in international events and make their contribution to the community. Please look forward to more developments from the APU Dolphins. 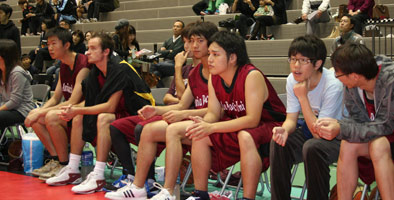