On Sunday afternoon, October 18, 2009, the "25th Oita-Ben Maru dashi Speech Contest" was held at the Bungo-Takada City Central Town Hall. This speech contest is rather unique as contestants are required to deliver their speech in the local Oita-Ben dialect. GUNAWAN Magdalena (APM3, Indonesia) was the only foreigner who participated in the speech contest. In fact, she was the first foreigner ever to participate in this speech contest.
Although missing out on the top prizes, Ms. GUNAWAN's fluent Oita-Ben impressed the crowd and the judges who presented her with a Special Award for her efforts to master the local dialect. Under the title of "I'm beating the Drum of Dreams", Ms. GUNAWAN spoke her experiences of playing the "Wadaiko" (Japanese drum) at APU. Contestants this year ranged from 15 to 73 years of age.

The "Oita-Ben Maru dashi Speech Contest" has been held every year for the last twenty-five years and every year approximately 1500 people come and watch. Twelve people participated in the speech contest which was open to all nationalities, age groups and backgrounds. Anyone who wanted to make a speech in the local dialect was invited to join. Many people keen to hear their local dialect, queued up for over 2 hours before the doors opened at 12 O'clock.

Ms. GUNAWAN spoke of her experience, "I am truly happy that I was able to join this speech contest. I would especially like to say thank you to my teacher who encouraged me to participate in this contest. Actually, I did not expect to receive an award and just wanted to enjoy the process. I was very surprised and pleased to receive a special award. My message for all of you is to try your very best in whatever you do and make the most of your time in Japan." 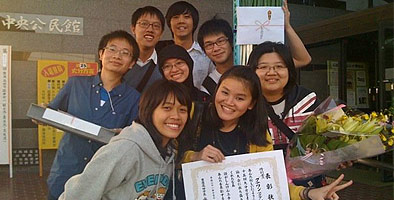