On Saturday, October 31, 2009, the APU Soccer Club held their "APU Cup" children's charity match. This match was held in cooperation with the "Peace Ball" project* of the NGO Peace Boat. The Peace Ball project aims to donate soccer balls to the children of the world. 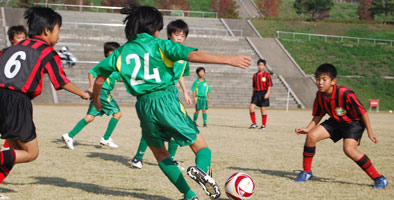 The Peace Ball project aims to collect unused soccer balls from the participating teams and spectators and deliver them to children throughout the world. Begun in 1998, the project has so far delivered over 10,000 soccer balls to approximately 40 countries around the world. This year's event came about after APU Soccer Club student manager, CHON Tesun (APS4) who participated in Peace Boat last year, introduced it to members of the APU Soccer Club and encouraged them to "make a contribution to the world through soccer balls".

On the day, five children's youth soccer teams from Beppu City, Oita City, Hita City, and Kitsuki City took part and round-robin matches. Each participating team had to donate at least one soccer ball to the cause and, combined with the donations from spectators, gathered 50 soccer balls. One of the team coaches said gave their impressions, "I wanted our team to join this charity match to understand that there are children all around the world in difficult circumstances and so that our team members could help the cause through soccer. We would definitely like to participate in any similar events in the future".

Looking back on the "APU Cup", Mr. CHON said, "This event was both an opportunity to reaffirm my belief in the greatness of soccer and make a contribution to local and international society, for which I am very happy. We were blessed with a fine day and the sprightly soccer moves of the young players left a great impression. I hope this tournament will remain in their hearts as a special event. I wish to express my heartfelt thanks to everyone who made today possible. Mr. CHON will be joining the Peace Boat on its latest voyage as a staff member when it leaves port on Monday, December 14. He plans to travel with the Peace Boat to South Africa, Brazil and Argentina. Let's look forward to further great things from Mr. CHON and the Soccer Club members. 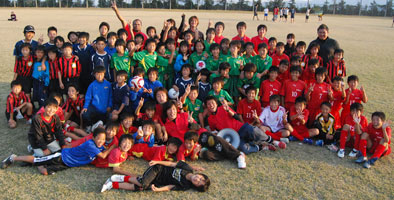