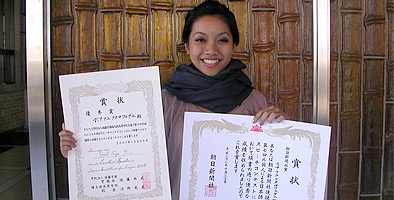 Under their respective speech themes of "Enjoying Muslim Life in Oita Prefecture" and "The Romeo & Juliet inside Me –the Importance of Family Love" Ms. Kusumawardhani and Ms. DISSA impressed the judges and the crowd with their fluent and lucid command of the Japanese language. Of the twelve participants this year, five were from APU in addition to students from Oita University and Beppu University.

Looking back on the event, Ms. DISSA spoke of her experience and thanked her supporters, "This was my first experience to participate in a Japanese speech contest so I was very excited. The other participants spoke very fluent Japanese so I was surprised when my name was called as the winner of 3rd prize. I would like to express my gratitude to Junior Lecturer WATANABE Wakana, who trained me so patiently and corrected my pronunciation and accent, and my mother for inspiring me to take part and for my speech theme". 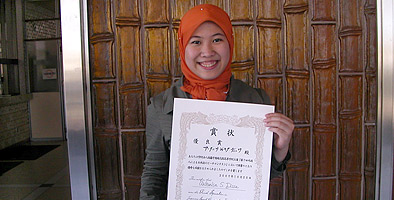 Hosted by the Educational Foundation-GOTO GAKUEN, this annual contest aims to promote the understanding of international culture and is held for foreign nationals who have lived in Japan for less than five years. Sections of this year's contest were broadcast by local television networks. 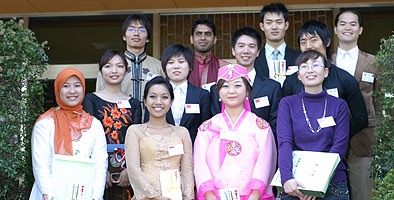