On Friday, December 11th a special lecture was held as part of the Japan & Korea Next Generation Film Festival in Beppu. Professor HATANO Yusuke welcomed President of the Northeast Asian History Foundation, CHUNG Jae-jeong, to speak in his Introduction to History class. The lecture was entitled "Toward the Road to Historical Reconciliation between Korea and Japan". 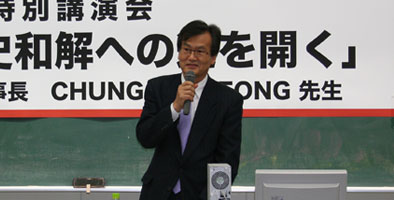 In his lecture, President CHUNG discussed his impressions of Korea-Japan relations from his 2–year study abroad stint in Japan in 1979 and 1980 and shed light on the sentiments of each country's citizens during that time and how bilateral relations have changed since. He also remarked on the need for both countries to understand each other's perspectives on history and to compromise in order to achieve true reconciliation.

The venue was filled with students and citizens who listened intently to the lecture on Japan-Korea relations and Korean culture. Many questions were asked in the question and answer session on topics such as discrimination by Japan and Korea against North Koreans resident in Japan and Prof. CHUNG's ideal for Korea-Japan reconciliation. The intense interest in this topic and the participants' awareness of the issues were evident.

One student participant remarked on his impressions of the lecture as follows: "On campus students can intermingle without touching on historical issues, but given APU's multicultural environment, I think the university should resolve to tackle this issue."

Many of APU's Korean students and students from other universities in Oita worked on subtitling films and staffing events for this year's Japan & Korea Next Generation Film Festival. 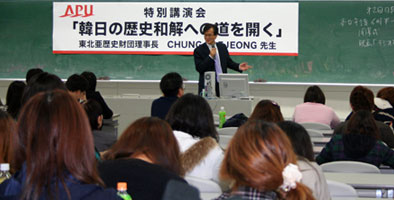