Through the continued efforts of APS Professor TSUKADA Shunso, APU has been working in collaboration with Kitsuki City, the Regional Environment Network NPO Trust and KDDI Corporation in a pilot scheme aiming to reduce Co2 emissions through eco-driving and eco-commuting and then convert the reductions into carbon credits. This project began in July, 2009. On Friday, March 5, 2010, a meeting was held at the Kitsuki City Chamber of Commerce and Industry for local Kitsuki City residents and reported on the state of the project in AY2009. 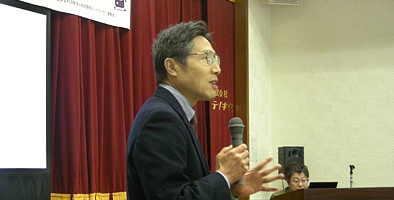 This scheme aims to utilize cellular phones to measure the hitherto difficult to visualize and tabulate CO2 reductions gained through eco-commuting and convert reductions achieved into carbon credits. This in turn serves as a sustainable incentive for those participating in the emissions scheme. The projects seeks to be more than a mere environmental policy, instead it aims to provide a policy for regional development and activation.

Representative of the Regional Environment Network NPO Trust, Mr. MIURA Ichiro, spoke of the current state of the project and reported on, 1) cell-phone technology, linking up with GPS technology, and the development of server software, 2) eco-commuting trials with local Kitsuki City volunteers and 3), the results of trial analysis. Furthermore, APU Professor TSUKADA gave a commentary on issues in the CO2 emissions reduction project.

A number of people came along to the meeting from municipalities around Oita Prefecture including Hita City, Saiki City, Taketa City and Kusu Town. Over seventy people including local manufactures and consultants participated and showed a great interest in the issues surrounding global warming.

This project has been designated as part of the University's projects to strengthen collaborative ties with the local region and is built on the Regional Collaboration Agreement reached between APU and Kitsuki City. In addition to APU faculty members, a four person team of undergraduate and graduate students is also taking part in this project.

Please click here for a previous article on this project:
http://www.apu.ac.jp/home/news/article/?storyid=1364 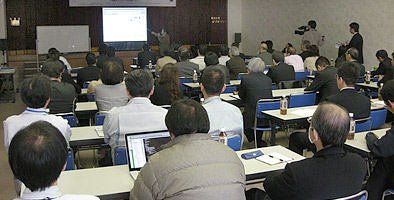