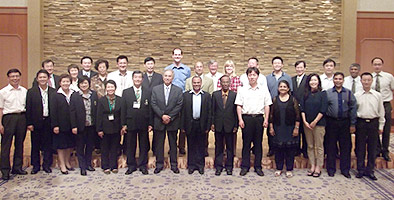 Held as an opportunity for senior high school administrative staff members to experience the culture of APU and daily campus life, the program also aims to expand APU's international network with high schools throughout the Asia Pacific region.

On Thursday, July 15, the groups met individually with APU President KORENAGA Shun who gave an introduction to APU's unique features including the scholarship system and bilingual language system. During their meeting with President KORENAGA, members of the Sri Lankan group praised APU for its international atmosphere and bilingual language system, "Due to the effects of globalisation, the world is getting smaller and smaller and we need more international universities like APU to meet the needs of a globalised world. In the past our students had struggled to come to Japan due to the language barrier but APU's bilingual language system has removed this hurdle. We are sure that our students will take a great interest in APU".

On Friday, July 16, members of the Thai group delivered DVD presentations of their respective high schools to an audience of APU faculty and staff members. Faculty members expressed their admiration for the high level of education in Thailand and offered their thanks to the Thai members for recommending their students to APU. Thai international students ensured the presentations went smoothly with interpretation offered in Thai, Japanese and English.