On Monday, October 11, 2010 (Sports Day), the APU student organization "Kizuna" Theater Company performed Pinocchio as its 6th musical to date. ("Kizuna" means emotional bond in Japanese).This performance of Pinocchio was based on the famous children's tale of the same name in which an innocent puppet crafted by a lonely homeless man comes to life, making people consider what it means to be human. This was the first musical that Kizuna ever performed with a comedic touch. Students supervised the entire process from script writing and production to casting. Many local citizens joined the audience of APU students who enjoyed the rare chance to see a musical performance.

Founded in 2005, Kizuna Theater Company is a student organization that forms for each performance and then disbands. Based on the concept of "providing Oita and Beppu with the opportunity to enjoy musicals for free", the company undertook this year's rehearsals with 55 members. Since members change from year to year, the company performs unique pieces from differing genres every time it gathers.

Company leader YOKOI Taichi (APS2, Japan) reflected on the performance by saying, "This time we attempted our first comedic performance in an effort to express the interconnectedness of people through laughter. We began as a rag-tag bunch of members, but each of us gradually began to get serious about the musical. As our name implies, we were able to come together as one group working toward a common goal". 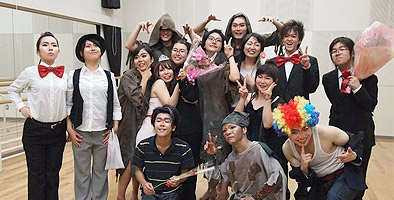