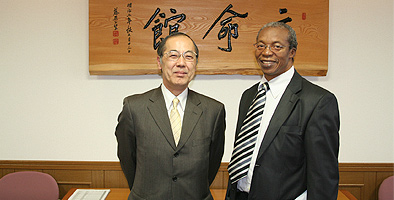 During his cordial meeting with Vice-President HIRATA Junichi, Ambassador Mbikusita W. Lewanika spoke of the role Zambia has played in regional conflict resolution: "I am sure that our country has much to offer APU students interested in international relations and conflict resolution in terms of research, exchange and expertise".

Arriving later in the afternoon, Ambassador Benson H.O. Ogutu then met with Vice-President HIRATA Junichi and a group of Kenyan students. Vice-President HIRATA expressed his wish to deepen exchange between the two nations: "I look forward to building a stronger relationship with Kenya and the African continent and promoting student and faculty exchange in the future". In response, Ambassador Ogutu said, "Education is the key for the sustainable prosperity of my country and I can see great potential in our students studying at APU. I look forward to seeing our relationship go from strength to strength".

Both Ambassadors then attended the African Week Grand Show and addressed the audience in what proved to be a great display of African Culture.

APU currently has 58 students from Africa who continue to make a great contribution to the academic and extracurricular activities on campus. 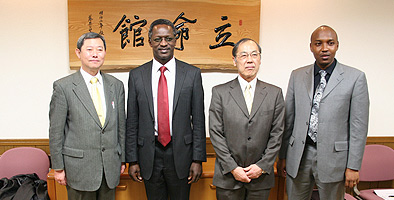