On Tuesday, May 24, 2011, the Beppu City Distinguished Sports Service Award Presentation Ceremony was held at the Beppu City Hall Reception Hall. Awards were presented to the APU Men’s Futsal Club and coach of the Women’s Athletics Team, KITAYAMA Yoshinobu.

The Beppu City Distinguished Sports Service Award is presented to teams and individuals in Beppu City who have made an outstanding contribution to local sports. Coach KITAYAMA was presented the award for his successful coaching of the APU Women's Athletics Team into one of the strongest teams in Japan. He was also recognized for his three years as coach of the Oita Prefecture representatives at the All Japan Long-distance Relay Road Race and his outstanding contribution to long distance running in Oita Prefecture.

In July last year the Men’s Futsal Club ‘Delfino’ claimed their maiden championship crown at the Kyushu Regional University Futsal Competition and are currently the top futsal college team in Kyushu. Team captain, SUGITA Ryuji (APS3, Japan) commented on receiving the award, “It’s a great honour to receive this award. This award is not only the result of our team’s efforts and success at the Kyushu Regional University Futsal Competition, but also the result of the backing of our many supporters. We don’t have a manger in Futsal which means that each and every member needs to constantly be thinking about what is best for the team. All team members practice hard and we are a team in the truest sense of the word. Our goal is to be crowned champions at the national tournament later this year”. 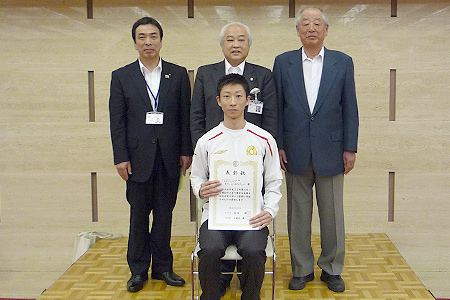