On Friday May 20, 2011, the Ambassador Extraordinary and Plenipotentiary of Japan to the Grand-Duchy of Luxembourg, H.E SUETSUNA Takashi visited APU and delivered a commemorative lecture. 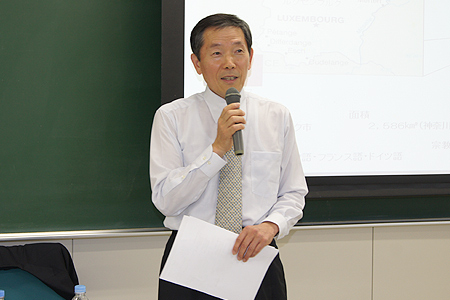 Born in Beppu City, Ambassador SUETSUNA entered the National Police Agency (NPA) in 1974 before serving as the Metropolitan Police Department Deputy Superintendent General and later the Grand Chamberlain of the Crown Prince at the Imperial Household Agency before assuming his current position as the Ambassador of Japan to Luxembourg in April, 2009. This special lecture came about when the Ambassador recently returned to Oita Prefecture following his duty accompanying the Hereditary Grand Duke of Luxembourg on his first visit to Japan.

During his special lecture, the Ambassador spoke about the current situation in Luxemburg and the EU, diplomatic activity and the international situation. The Ambassador also spoke about the important old quarters and streets of Luxemburg City that are now registered World Heritage Sites, and the country’s famous wine industry. He also raised a few statistics about the state of the nation in comparison to Japan including the GDP, population, ODA, military expenditure and financial contributions to the UN.

At the conclusion of the lecture, Ambassador SUETSUNA offered a message to APU students, “One thing I have learnt through my career is that we should always try to like the people around us. It is said that the way you feel towards a person is the way that they will feel towards you. Please try approach people with a generous state of mind. Also remember that a person’s personality is the result of genetics and the environment they were raised in. That doesn’t mean that a person’s character cannot change though. Generally speaking, Japanese tend to be introverted and this can be barrier when working overseas. There comes a time when you have to be assertive otherwise people may assume that you don’t have an opinion of your own. The multicultural APU campus is a great place to redefine yourself. I encourage you to be ambitious and lead active careers around the globe”.

This was a great opportunity for APU students to get a glimpse into the world of diplomacy which, to Ambassador SUETSUNA it seems, is essentially dialogue between people. 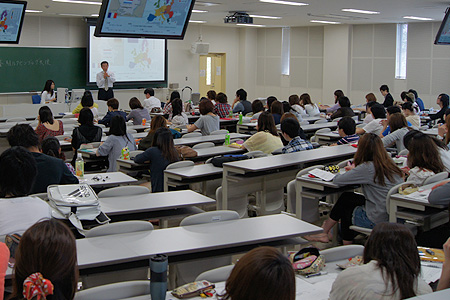