On Monday, May 30, 2011, ISHII Toshiro of the Democratic Party of Japan visited APU and met with APU President KORENAGA Shun, Vice-President HIRATA Junichi and Vice-President HOMMA Masao. ISHII Toshiro is a Member of the House of Representatives and a Committee Member for Education, Culture, Sports, Science and Technology. Following his discussion with the APU executives, Mr. ISHII met with seventeen international students from the Philippines, Vietnam, China and Korea, and enjoyed a guided tour of AP House. 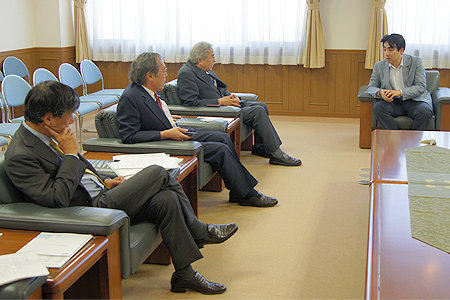 During his discussion with the APU executives, Mr. ISHII raised a number of questions about the details leading up to the establishment of APU, the countries of origin of international students and their employment success rate, Japanese language education, and the positive influence international students have had on Japanese students.

In response, President KORENAGA spoke about the unique features of APU including the strong Japanese language education programs for international students, the stable and high employment success rate of APU students, and the pioneering spirit the University has shown as a practical example of how the MEXT-backed Global-30 Program* can be implemented. President KORENAGA also commented on the positive effect international students have had on their Japanese counterparts: “international students are very good at expressing their opinion and this has had a positive impact on Japanese students. As a result, we have many proactive and outgoing Japanese students at APU”. He then introduced AP House as a venue for student growth and development and expressed his wish that Mr. ISHII proclaim to the world, at a government level, that, “Japan is safe and that despite the rumors circulating in the international media about the recent earthquake in northeastern Japan and the resulting situation at the Fukushima nuclear power plant, the level of naturally occurring background radiation in Japan is much lower than many of the major cities around the world”. 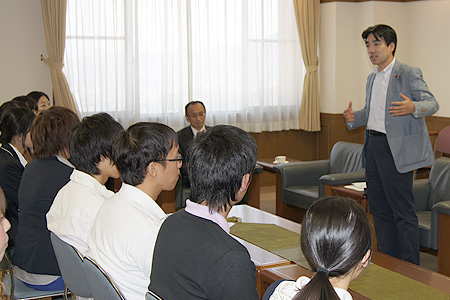 Following their discussion, Mr. ISHII enjoyed an exchange of opinions with seventeen APU international students about their dreams for the future, the strong and weak points of APU, and their campus life. Mr. ISHII showed a keen interest in the students’ frank opinions.

*The Global 30 Project
Backed by the Ministry of Education, Culture, Sports, Science and Technology (MEXT), the Global 30 Project aims to promote Japan’s international competitiveness, provide a level of education that can attract foreign students to Japan, and ultimately support the development of graduates with the skills they need to play an active role on the global stage. Seven national universities have been adopted into the program in addition to six private universities including Ritsumeikan University. 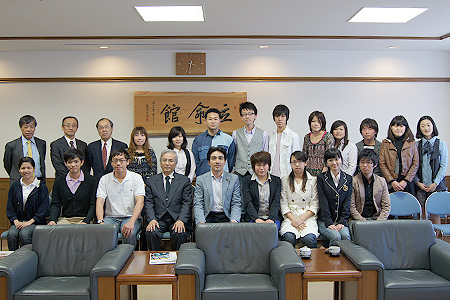