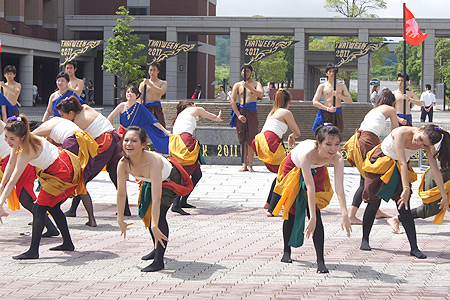 The next installment of the AY2011 Multicultural Weeks, “Thai Week”, kicked off on Monday July 11 and will run until Friday July 15. During the week, a number of colourful events will put the spotlight on the unique Thai culture and language.

This year’s Thai Week will feature a range of events including the perennial favorite super-spicy Thai food eating contest, a display of traditional Thai costumes, and vegetable carving. A special range of traditional Vietnamese dishes, including Tom-yum-goong, will also be available at the Cafeteria for a limited time at very reasonable prices.

Held on the final day of the week, the “Grand Show” will follow the famous Thai story of “Tawiphop” and feature a Thai boxing display, a fashion show, and a range of Thai dance performances including both traditional and contemporary. Help prior to the Grand Show, a representative of the Thai Boxing Association in Fukuoka will be giving a live Thai boxing demonstration.

Monday, July 11. 14:00 – 14:15 @ in front of the fountain
Opening Parade
Participating students will be dancing traditional and modern dance as they parade dresses in traditional Thai costumes

Tuesday, July 12. 13:00 – 15:00 @ Cafeteria
Super-spicy Thai food eating contest & mini concert
Six participants (one representative of each of the spring semester Multicultural Weeks plus the winner of last year’s contest) will face-off for a super-spicy Thai food eating contest. The event will be followed by a mini concert with traditional musical instruments.
NB: This event is not open to the general public

Thursday, July 13. 12:30-15:00 @ Multipurpose Hall (held indoors in the event of rain)
Sports Day
Teams representing each Multicultural Week will face off through seven traditional and popular Thai children’s sports and games.
NB: This event is not open to the general public 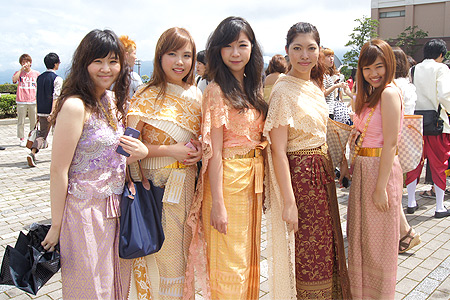