On Tuesday, September 20, 2011, the Ambassador Extraordinary and Plenipotentiary of Japan to Mongolia, H.E. Takenori SHIMIZU, visited APU and met with President KORENAGA Shun. The Ambassador was accompanied by Ms. GOTO Sayoko, President of the Oita Personal Training and Regional Cultural Interchange Association.

During their discussion, President KORENAGA introduced some of the features of APU: “The dual English-Japanese language curriculum that we offer at APU has opened the doors to international students who want to study in Japan. Furthermore, our graduates continue to be popular with Japanese companies for their high levels of Japanese proficiency and international communication skills developed in our multicultural campus environment”. In response, the Ambassador expressed his interest in the APU education system: “People in Mongolia feel a great affection towards Japan and the support that Japan offered their country during the processes of democratization. As a result, there are many students in Mongolia who are interested in learning Japanese and studying in Japan”.

Since entering the Ministry of Foreign Affairs, Ambassador SHIMIZU – a native of Oita Prefecture – has enjoyed a long career in the field of Japan-Mongolia diplomacy including a post as Counselor at the Japanese Embassy in Mongolia before taking up his current post as Ambassador Extraordinary and Plenipotentiary on September 1, 2011.

President KORENAGA – a scholar of Chinese literature, and Ambassador SHIMIZU – an expert on Japanese/Mongolian relations, discussed a range of topics including the economic rise of China, Sino-Japanese relations, Sino-Mongolian relations, the international situation in East Asia, and more. President GOTO, herself a native of Oita Prefecture, also enjoyed discussing issues concerning the Prefecture in what proved to be a very cordial meeting. 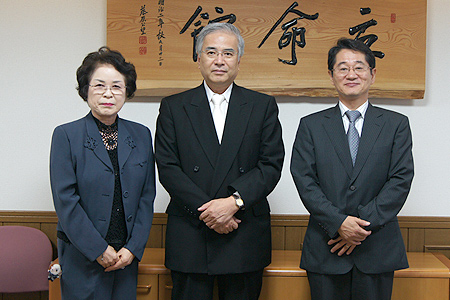